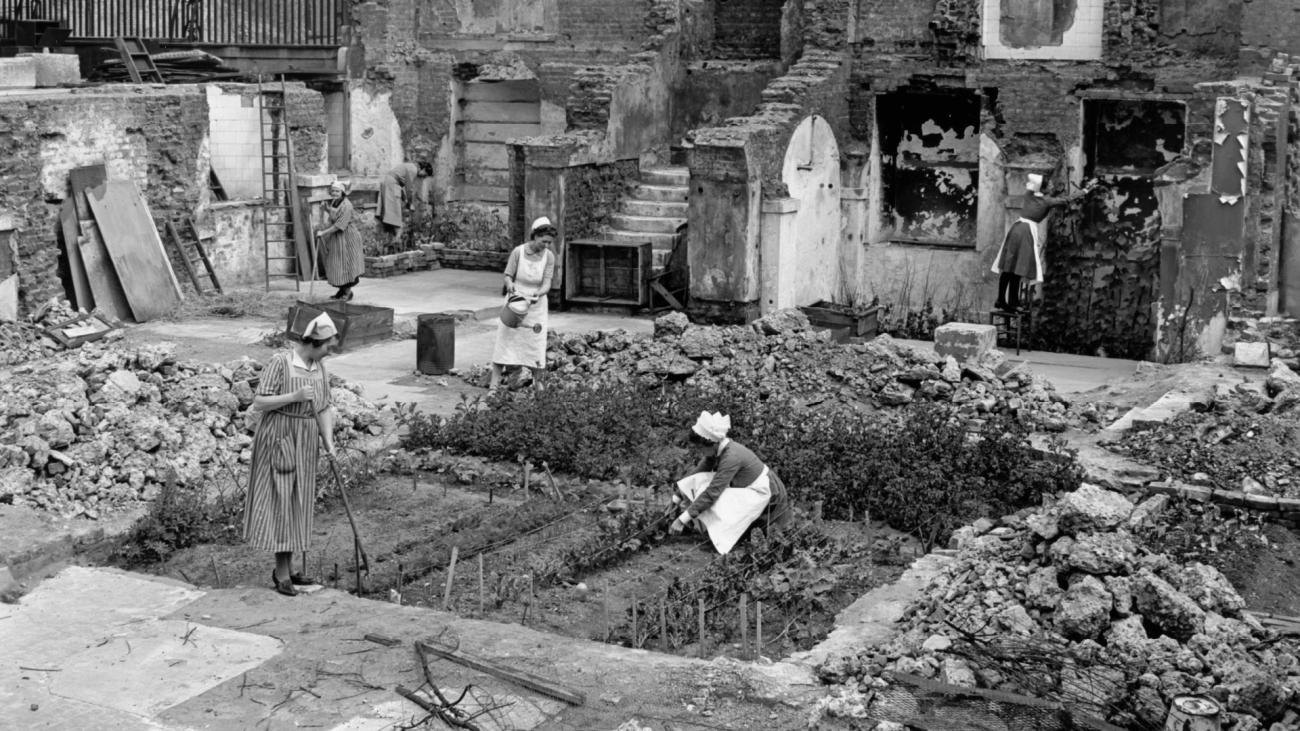 Nurses and staff from Guy's Hospital, Central London, tend to their vegetable allotment garden, created as a part of the Dig for Victory war effort campaign on the reclaimed bomb-damaged land of the hospital foundations. 7th July 1942. (Photo by Fred Morley/Fox Photos/Hulton Archive/Getty Images).

Modern-day food systems are implicated in the biggest challenges our planet and people face. They are responsible for one-quarter to one-third of human-made greenhouse gases. And while plenty of food is produced, much of it is wasted, and millions go hungry.

Although a burgeoning food movement is beginning to address some of these climate and inequality issues, the emergency we face requires nothing less than major structural change, some of which will need to be mandated.

The reform of food systems may seem like an idealistic goal, but it’s been done before – in wartime Britain.

Nobel economist Joseph Stiglitz has described the climate emergency as our third world war. “Our lives and civilization as we know it are at stake,” he wrote, “just as they were in the Second World War.”

And in fighting our third world war, we stand to gain insight from studying some of the strategies behind the second.

At a London museum exhibit called “The Ministry of Food,” I learned how the British government and citizenry transformed their agriculture and diets to ensure food security through the chaos of World War II (WWII).

Food-system architects decreased food imports and re-localized much of production. They analysed the supply chain to minimize waste. Almost 50 million citizens learned to embrace simpler meals, grow some food, waste nothing edible, and respect rationing, so everyone could get a fair share of butter, sugar, and other scarcities.

Here was evidence that food systems can change. How did they do it?

You can't win a war if you're hungry.

In the late 1930s, when war was imminent, British food security was a priority. A Ministry of Food was empowered to manage the system. Farmers were instructed and incentivized to lower livestock numbers and grow more crops for people. Families were inspired to convert green spaces into vegetable plots, dubbed by a 1941 gardening guide as “Plots Against Hitler.”

The project was daring, with little precedent. There were controversies and mistakes. But British wartime food policies and practices did ensure that the domestic population was fed – millions of them better than prewar. That helped narrow the country's socio-economic gaps and improve public health, especially for women and children. Tuberculosis and diabetes mortality declined. The farm sector was revitalized, and farmers received government-supported prices for their crops. Localized food systems redirected shipping resources to military needs, while ensuring food access and boosting morale. Wartime food programs helped Britain and its Allies win the war.

I. Food systems can change.

At the start of the war, two-thirds of the calories consumed in Britain were imported, and local agriculture was depressed. Processed meal items were common, and meat, eggs, or other animal-source foods were daily fare. For half the population, however, undernutrition or malnutrition was a reality. But by the end of the war, close to 70 per cent of the food eaten in Britain was locally produced. Virtually everyone was receiving adequate calories and nutrients. Due to wartime shortages, most were eating less sugar, meat, and processed food, but more plant-based dishes. Without ice cream, children were enjoying carrot on a stick! Although fighting climate change was not the motivation for these changes, those wartime meals sound like modern definitions of sustainable diets.

Today, with over half of Canadians overweight, and more than 15 per cent food insecure, we might want to ask ourselves why we perpetuate food systems that are highly industrialized, oligopolistic, livestock-centred, and market-driven.

British officials did not wait for widespread hunger during WWII, but acted decisively, and for reasons that were practical, not ideological. Reluctant to intervene in markets, the Conservative government nevertheless remembered British hunger in WWI and knew that war damages food systems. So it moved to manage food and rallied citizens for what Prime Minister Churchill foresaw as “an ordeal of the most grievous kind.”

“Victory may well be won by the country with the most food,” warned Woolton, the Minister of Food. They implemented price controls for affordability; school programs that fed millions of children; and publicly run “British Restaurants,” where anyone could get a satisfying meal for the equivalent of about a dollar in today’s money.

Despite the current emergencies we face, we're short on courageous leadership at high levels of government. We keep building fossil-fuel infrastructure, and lack coordinated plans for citizen action on climate or sustainable food. Where is the inspiration and guidance?

III. Some changes must be mandatory.

As Seth Klein argues in his important book A Good War, governments that recognize an emergency shift from voluntary to mandatory measures. In WWII Britain, laws were passed against hoarding and wasting food. Officials didn't politely ask consumers to take only their fair share of bacon, cheese, or jam – they mandated it through rationing and other measures.

Though some felt resentful, polls soon showed that most citizens supported the food programs, including rationing. They understood that the system limited the amounts of tea they could buy but also assured them access to those amounts.

Today, we should consider mandating some aspects of sustainable food systems. We could strongly sanction food waste and set fair, per-person allocations of emissions-intensive foods that have disproportionate climate impacts, such as meat and dairy.

Mere invitations to participate were not enough in wartime, and will not be enough today. With mandated actions, we know that when we subscribe to new rules, our neighbours will too. There will always be a few anti-social types who refuse to play fair, but most of us want to do the right thing.

Calling for rationing of emission-intensive consumption draws passionate debate. But how else can we quickly lower the types of consumption that fuel the climate crisis? There's nothing radical about allocating fair shares of things that are (or need to be) limited. Most consumer goods are selectively allocated – usually by price. And we already ration access to limited resources using licenses, and first-come-first-served or triage systems. If you want to hike the West Coast Trail, you’ll need to wait for a reservation permit, so the ecosystem isn’t overburdened.

IV. Everyone needs to be involved.

Wartime food programs rallied everyone. Farmers had to plant certain crop species and ramp up yields. Grocers had to work with ration programs. Families dug up yards and parks to plant food. Everyone knew that no food should be wasted.

We can do it too.

The story of wartime food is optimistic, but making systems crisis-ready takes commitment. We'll need to cut back on feast food and eat more simply. We'll need to spend more time in gardens and kitchens. Resilient food systems require determination, trust in each other, and – dare I say it? – sacrifice. Are we up to it?

Eleanor Boyle researches food and its impacts on environment and public health. She holds degrees in psychology (BA), neuroscience (UBC, PhD’92), and food policy (MSc). Her book Mobilize Food! Wartime Inspiration for Environmental Victory Today (mobilizefood.org) is published by FriesenPress (2022) and is available at UBC Bookstore, other outlets, and online booksellers. The author invites comment and conversation at eleanorboyle@gmail.com.