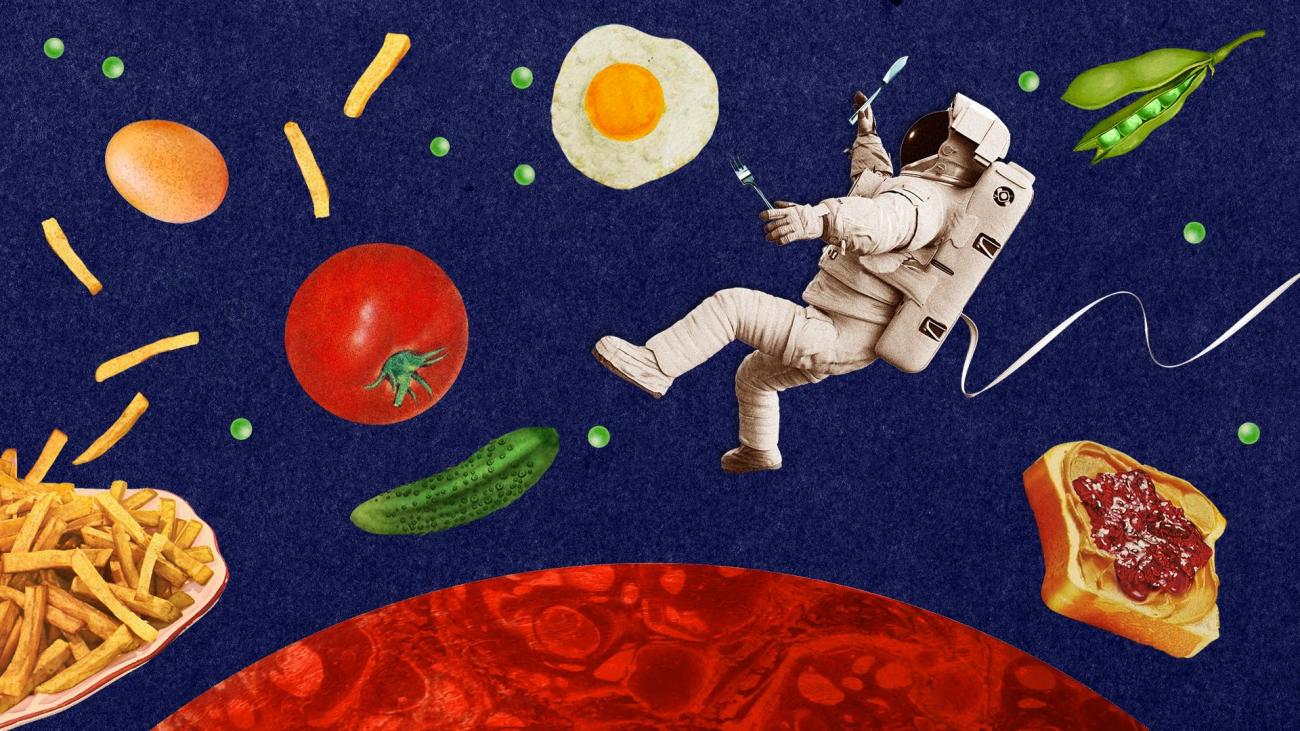 Feeding the mission to Mars

A UBC prof tackles the challenge of adequate nutrition for astronauts.

In space, no one can hear you scream. Also, the food is terrible. Due to safety protocols, astronauts have no ovens, microwaves, or stoves. They can’t fry eggs or make toast. They aren’t even allowed to boil water. If you could describe space food in one word, it would be “mushy.”

“Because of the means they have to prepare food, the textures are all very uniform and unexciting, so food fatigue is a big issue,” says UBC chemical engineer John Frostad.

Frostad’s research into the physical structures of food addresses some of the myriad challenges of feeding astronauts in space, especially for long-term missions. One problem is texture and variety: Slurping your morning eggs from a hermetically sealed bag may be tolerable for a few weeks or months, but not years. Furthermore, there are certain vital nutrients – such as omega fatty acids – that can’t be preserved for long periods of time. “One of the reasons we cannot go to Mars right now is that the astronauts would die of malnutrition,” Frostad says.

Frostad, who hails from Washington State, is not a nutritionist, though he does love food. His favourite things about Canada are poutine and Vancouver’s vibrant sushi scene. In addition to the Department of Chemical and Biological Engineering, he is also a member of the Faculty of Land and Food Systems, an interdisciplinary body that is working on some of the biggest problems facing the effort to feed the modern world.

As an engineer, Frostad tackles food-related challenges using physics and math. For example, one of his non-space projects developed an additive for pesticides that sticks to plants instead of letting it drip off onto the ground, saving money for farmers and reducing soil pollution. In another project, Frostad is designing a spray coating for canola plants and other grains that keeps their kernels from falling off the heads, a process known as “shattering” that causes farmers to lose up to half their yield. “You can essentially double the production of grain worldwide with no new agrichemicals,” Frostad explains.

"One of the reasons we cannot go to Mars right now is that the astronauts would die of malnutrition.” – John Frostad

The grain spray is a long way from completion; Frostad calls it a “pie in the sky” project. But he isn’t afraid to think big. His ultimate dream is literally out of science fiction: “I would really like to see the food replicator from Star Trek,” he says, referencing the fictional invention that can create any dish in an instant. “I'd like to see somebody figuring out how to molecularly assemble food to get natural flavour and variation,” he says. “That's gonna require all kinds of crazy innovations, maybe even on the quantum side of things.”

Unfortunately, the real-world food industry tends to be less adventurous than Frostad would like. Profit margins for food manufacturers are razor thin, and they make money by keeping volume high and costs low. Frostad’s approach – which involves advanced mathematical models – is often too costly. For example, he once consulted with a tofu maker whose recipe was thrown off after changing the supplier of one ingredient. Frostad wanted to develop a sensor that could monitor the tofu-making process on a chemical level, but in the end it was cheaper for the company to fix their recipe using simple trial and error. They still didn’t understand the problem, but at least they could keep making tofu.

The conflict between innovation and the need for quick, cost-effective solutions affects every aspect of the food industry, from tofu factories to the International Space Station. Fortunately, the Canadian government does incentivize private manufacturers to partner with scientists at institutions like UBC, and this has led to many promising innovations. In the meantime, Frostad will continue working to solve the most difficult dietary puzzles.

For his latest project, he is developing a way to preserve omega fatty acids for long space flights. Many Earthlings associate omega fatty acids (especially omega-3s) with fish-oil pills purchased from health stores. But in reality these essential nutrients are derived from many common food items. And furthermore, says Frostad: “If you don't eat them for some period of time, two-ish years, you're gonna die.”

Unfortunately for astronauts, these fatty acids break down too quickly to be stored on a multi-year space voyage. But simply vacuum-packing fish oil won’t do the trick; the acids need to be protected on a molecular level.

To this end, Frostad and his team are working on tiny capsules containing flaxseed oil, a rich source of omega fatty acids. “You have a small droplet of oil the width of a hair,” he explains, “and you pack some kind of protective shell around it.” Frostad believes such a shell can be made of starch, a material found in basically every plant (and dry cleaner’s shop) on Earth. On the microscopic level, starch resembles tiny marbles. “There are still gaps between them where oxygen could get in,” explains Frostad. “What’s cool about starch is that when you heat it up, it swells, and we can use the swelling process to seal the gaps between the particles.”

Et voilà: a microscopic-starch-marble shake mix that gives omega fatty acids an extra-long shelf life, can be readily ingested during a long voyage, and could save the future of deep space exploration.

Frostad doesn’t know if what began as an effort to feed the first mission to Mars will end in the miracle diet pill of the future, but he intends to find out.