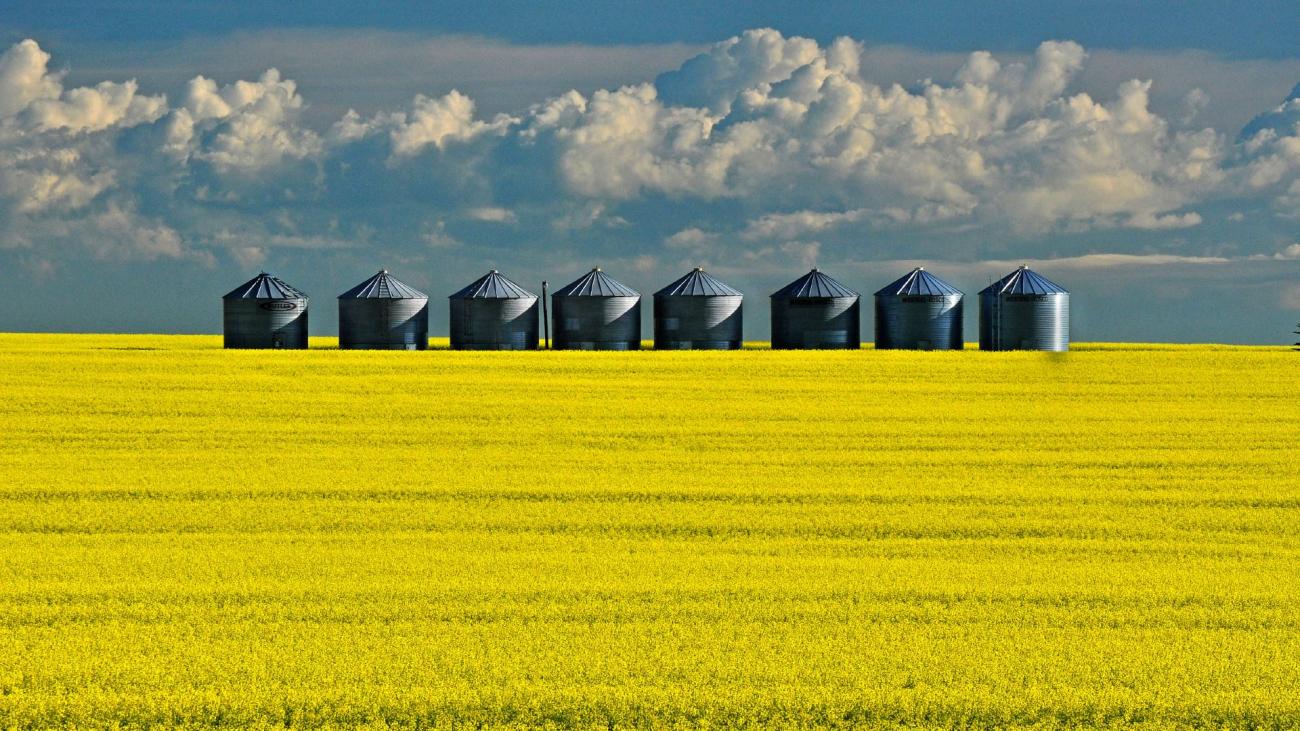 A complex problem in need of a complex solution. It’s going to be tough, says UBC prof.

“We place too much faith in revolutionary ideas.”

Despite that note of caution, Professor Navin Ramankutty – who holds the Canada Research Chair in Data Science for Sustainable Global Food Systems – has all the markings of a frustrated radical. If you give him the slightest nudge on the topics of land use and global food security, he launches into a passionate and urgent discourse:

We self-obsessed humans have set aside fully one-third of all land on earth to feed only our own species, he laments, and yet we still leave almost a billion people undernourished and another two billion malnourished. Agriculture is the biggest driver of biodiversity loss, he notes, and a leading cause of climate change, chemical pollution, air pollution, soil erosion, and the pollution and overuse of water. And despite the rapacity and impact of our current agricultural practices, he warns that we still need to do more.

Navin Ramankutty
Canada Research Chair in Data Science for Sustainable Global Food Systems, cross‑appointed at the School of Public Policy and Global Affairs and the Institute for Resources, Environment and Sustainability at UBC.

Research Focus
He aims to understand how humans use and modify the Earth’s land surface for agriculture and its implications for the global environment.

Life Course
His fondest childhood memories are from his grandmother’s village, in Palakkad, Kerala, a southern Indian state. To this day, that beautiful landscape of paddy fields, forests, houses, and mountains is imprinted in his mind as emblematic of how humans could live in harmony with nature.

Aside from failing so many in our current population, by some estimates we will have to increase world food supply by 70 per cent by 2050 to feed an anticipated population of close to 10 billion. On the list of so-called “wicked” problems (those characterized by their complexity and intractability), Ramankutty says this land-use problem may be “worse than climate change.”

If that sounds like hyperbole, or like an academic trying to one-up someone else’s field of study, it’s important to know that Ramankutty’s first graduate degree (University of Illinois) was a master’s in atmospheric science. He
was already stressing about climate change when he diverted into land resources during his PhD (University of Wisconsin-Madison). And now he directs the Institute for Resources, Environment and Sustainability at UBC.
So he’s not challenging the scale of the climate threat – only commenting on what we have come to talk about as its relative wickedness. With climate change, he says, the experts overwhelmingly agree on the causes, the consequences, and the best possible responses. Regardless of the manufactured debate in the public square, “there’s not much controversy among scholars.” But when it comes to feeding humanity with a minimal environmental footprint, “I don’t see an obvious solution.”

Ramankutty is cross-appointed at UBC’s School of Public Policy and Global Affairs. In what he characterizes as a “vociferous debate” among leading scholars, there are two main schools of thought about the best way to achieve sustainable food security goals. On one side are those who argue for “sustainable intensification,” leveraging more of the elements that helped us increase food production during the “Green Revolution” that began in the 1950s: irrigation, mechanization, fertilizers, pesticides, crop breeding, and, latterly, genetic engineering. Recalling the famines that were common in the 1970s and ’80s, there is no question that these technological interventions worked miracles in helping to reduce world hunger, even as the global population roughly doubled between 1975 and 2020.

On the other side of the debate, however, are those who look at the concurrent damage caused by modern farming and call instead for solutions based in agroecology. They urge a more organic, environmentally friendly approach conducted in greater harmony with nature.

At first blush, Ramankutty seems to lean into the latter camp. He talks wistfully about the sustainability of organic farming, but then he asks, “What are the trade-offs?” In most organic operations you get better quality food but lower yields, which means we would have to repurpose more land to feed even the current population. Since the days when Indigenous peoples were truly living in harmony with the land, the world has transformed and the human population has exploded. “There is no going back,” Ramankutty says.

There is, however, a third solution – still no silver bullet, but one that deserves consideration. Instead of focusing on supply‑side fixes designed to provide more food overall, Ramankutty says we should attend to the demand side: managing human consumption and reducing waste and loss in the harvesting, storage, distribution, and preparation of food.

Ramankutty points out that, globally, we waste 30 per cent of the food we produce. Individually, we let it rot in the fridge or scrape the excess off our plates into the garbage or the compost bin. Collectively, we lose huge amounts of food during production, through poor harvesting techniques; during storage and handling, when food is degraded by pests, fungus, or disease; during processing and packaging, when food is spilled, damaged, or rejected as unmarketable; and during distribution and marketing, when foods go bad on the shelf because they don’t meet aesthetic standards or outlive their “best before” dates.

We also farm and eat wastefully. We use some of the best land on the planet to grow corn but deliver only 24 per cent of that crop as calories that people eat. Instead, we use some to produce biofuel and even more to feed animals that return only between three and 40 per cent of the food value in calories. With cattle, for example, only three per cent of the plant-based calories used for animal feed are delivered to humans as consumable beef. And, on average, North Americans and Europeans eat twice as much meat as is recommended for a healthy diet. In that context, one study showed that shifting crops away from animal feed and biofuels to human consumption could increase global calorie availability by as much as 70 per cent.

But, taken individually, none of the solutions above appears likely to set humanity on a satiated and sustainable course. In keeping with the complexity of the problem, Ramankutty says, we will have to embrace a complex solution; rather than trying to pick winners between the technological and organic camps, we need some cautious strategy incorporating “all of the above.” As others have said, we need evolution, not revolution. We absolutely must promote farming techniques that are less environmentally damaging, but it doesn’t make sense to sacrifice the efficiency and productivity advantages of some of the big, technologically oriented approaches. And no matter how much progress we make on the supply side, Ramankutty says it’s critical that we reduce wastage and crucial that we begin to eat less meat, eat more seasonally, and reduce dietary excess, which includes avoiding the empty calories in refined fats, sugars, alcohols, and oils.

This is going to be tough, Ramankutty says. We’re not just trying to nudge willing collaborators toward better decision-making. We have to overcome the technological and financial inertia that is sometimes referred to as “path dependency” – the reluctance, after investing heavily in a particular practice, to instigate an expensive transition to something that, especially in the short term, could deliver an equal or smaller return. For example, it’s hard to convince farmers who have spent a fortune clearing vast tracts of land and buying industrial-scale equipment to change course, reducing their plot sizes and complicating their farms. Everyone can see the environmental benefits when farmers plant new trees, hedgerows, and flower strips to support biodiversity, but farmers working the edge of profitability are likely to resist reducing or obstructing the land available
for planting and harvesting.

We use some of the best land on the planet to grow corn, but deliver only 24 per cent of that crop as calories that people eat.

In a world that seems increasingly hostile to outside “experts,” it was also predictable that farm (and fertilizer industry) lobbies pushed back earlier this year when the federal government suggested it might soon require a 30 per cent cut in fertilizer-related greenhouse gas emissions. To some, that sounded like the government was interfering inappropriately in their business. They argued that reducing a vital crop input by 30 per cent would result in a corresponding 30 per cent loss in harvest. In practice, though, fertilizers are frequently misused or overused, with huge amounts of nitrogen spilling over to create air and water pollution. Ramankutty says the ideal response would be farmers saving money by adjusting their practice – using fertilizer more sparingly and effectively, without losing its effect.

Food is also deeply cultural and increasingly political. As Ramankutty says, “People don’t eat steak for the calories.” So-called “high-quality protein” is a mark of privilege and status that people often choose as soon as they move into the middle class; it’s hard to tell them not to, even if they were perfectly well-nourished before making the change. “When you turn on the light, no one cares whether it shines because the fuel was coal or hydro,” says Ramankutty, but there are lots of reports about people complaining when they see new vegetarian or vegan features on a fast-food menu, even when no meat options have been removed.

So we have to be sensitive to culture and politics and look for solutions that have more co-benefits (such as spend less on fertilizer; reduce pollution) and fewer trade-offs. Given that current agricultural practices contribute fully a third to the forces of climate change, Ramankutty says the best part is that any progress we make on the agriculture front will help the battle against global warming. By addressing world hunger and land use, we can solve, or at least make headway against, two wicked problems at once.