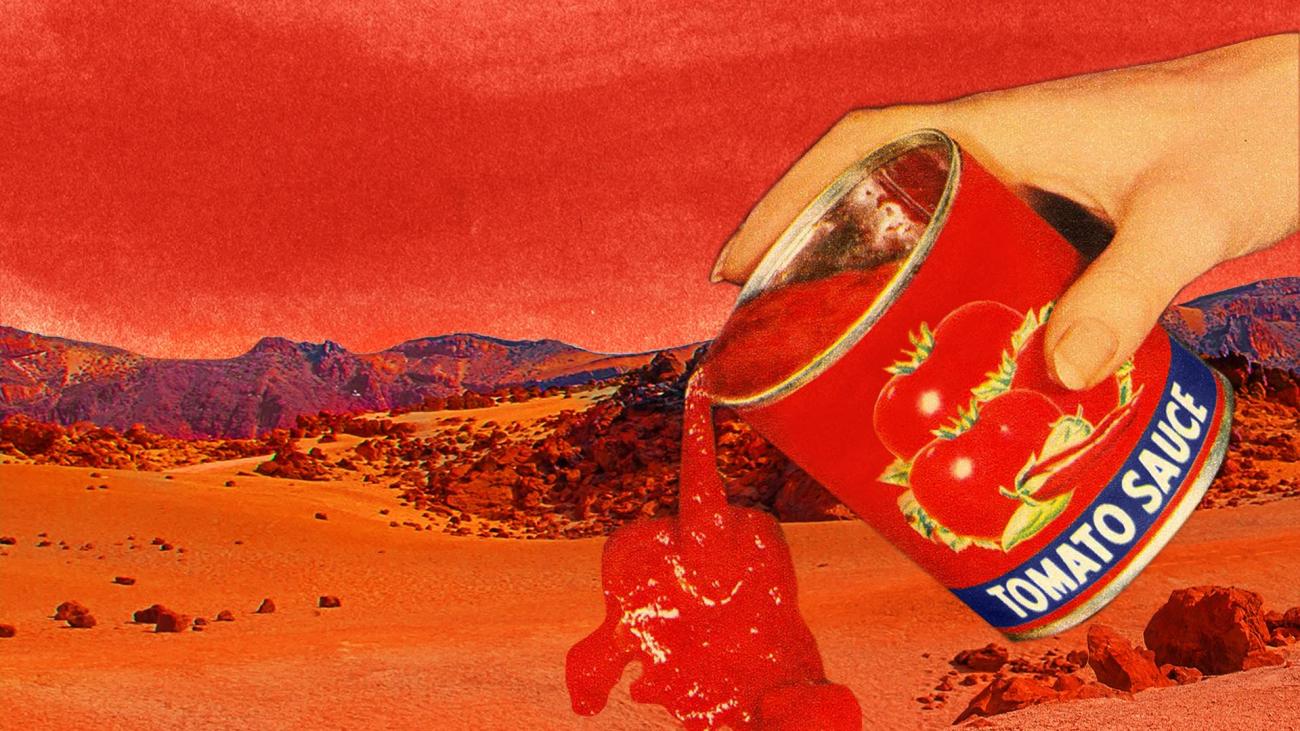 What will Martians eat?

Two food security experts explore how the first Mars colonists might feed themselves.

In the 2015 film The Martian, a stranded Matt Damon struggles to survive on the Red Planet by making water from scratch, building a greenhouse from duct tape, and growing potatoes in human excrement.

Now imagine that premise, but with thousands of Matt Damons living on Mars – not for months, or even years, but forever. And these people aren’t just surviving, but thriving: growing whole farms of potatoes, lounging in artificial parks, and eating dinner together in glittering dome canteens as they admire the red sunset.

That vision not only can, but will be a reality one day, say food security experts and UBC alumni Lenore Newman and Evan Fraser. Their new book, Dinner on Mars: The Technologies That Will Feed the Red Planet and Transform Agriculture on Earth, begins with a single problem: What would Martians eat?

In answering this simple question, Newman and Fraser sketch out a fully-realized Martian society based on present-day and near-future technology. Their imagined city, dubbed BaseTown, is a utopia of glass domes, lavish greenhouses and aviaries, and colossal indoor fields plowed by solar-powered tractors. Its 10,000 or so residents work together to maintain a fully self-reliant community in the harshest environment known to humankind, yet somehow they find time for art, entertainment, Philosophy, and love.

“It was the perfect pandemic project to try and build a world in which these Martian citizens didn't starve to death,” says Newman. She and Fraser, who have been friends for decades, came up with the idea during COVID isolation. “We were just chatting because we were bored... we were, like: ‘You know, we may as well be on Mars, cause we're trapped.’ And we started talking about it.”

The innovations Newman and Fraser came up with include seeding the Martian soil with genetically-engineered algae, fortifying plants with nanoparticles, and generating power with swarms of robots with solar panels that unfurl “like butterfly wings.”

BaseTown would also raise animals, but Newman and Fraser disagreed, somewhat, on the question of whether or not the people of BaseTown would eat them. “But why would we take animal farming, which is horridly inefficient and morally bankrupt, with us to a new planet?” asks Newman in a chapter devoted to the question. Fraser counters that it would be difficult to get people excited about living in the colony without the prospect of an occasional steak. “I don’t know if we’ll be able to sell Mars if it’s vegan,” he said.

Dinner on Mars is filled with these sorts of exchanges between its authors, who are both renowned academics. Newman, who took her undergraduate degree at UBC, directs the University of the Fraser Valley’s Food and Agriculture Institute and has advised both the Canadian and British Columbian governments on agriculture and food security. Fraser attended UBC for his doctorate in environmental studies and resource management and currently directs the Arrell Food Institute at the University of Guelph. Yet despite this scholarly cachet, Dinner on Mars reads like a conversation between two friends at a bar bantering over whether or not the Mars utopia should serve bacon.

But why should readers care about an imaginary interstellar situation when there are so many real-world problems left to solve down here on Earth? Newman emphasizes that all of the book’s space-age wonders are based on real-world engineering, and argues that many of the book’s solutions can be used to solve present-day problems such as pollution, food security, and climate change. BaseTown’s indoor farming techniques, for example, could be employed today to grow crops in harsh winter climates. “One example of great importance for Canada is growing leafy greens indoors year-round,” Newman explains. “In five years, in the winter you will not be buying lettuce from the Salinas Valley in California, you'll be buying it from down the road.”

“Mars is the mother of all sandboxes,” adds Fraser. “We’re using the sandbox of Mars to think about applications of existing technologies that can solve existing problems.”

In this case, “sandbox” is both literal and metaphorical. Mars has no petroleum, because the fuel is formed from the remains of ancient marine organisms, and Mars had no such life that we know of. Thus, the people of BaseTown will have no way to make plastics, which means the greenhouses, windows, bottles, and fibre optic cable would be made of glass manufactured from the planet’s sand. This meant Fraser and Newman spent a lot of time researching glassmaking, from present day to ancient Rome. “I was like, ‘Oh God, this is gonna be so boring. And it turned out to be really fascinating. Glass is much more complex than I ever imagined,” Newman says.

For all of its far-future speculation, Dinner on Mars spends a lot of time in the past. Indeed, the preface begins 150 years ago, with the notorious expedition of Sir John Franklin, who died attempting to explore the Arctic. Technology may have changed since Franklin’s time, but Newman and Fraser maintain that our drive to explore, innovate, and solve seemingly impossible tasks has stayed the same since humans lit the first fires and plowed the first fields.

“I realize that there are pressing issues on Earth, and maybe the money spent on space exploration could be purposed to higher and better purposes on Earth,” Fraser says. “But I think that the value of the Martian mission is that it allows us to dream on the biggest possible scale, and it gives us a galvanizing common problem to work towards.”

Make no mistake: As fictitious as BaseTown may seem, the pair truly believe that a Mars colony is not a matter of if, but when. Newman majored in astronomy and physics at UBC, and throughout her career has always kept an eye on the stars. In fact, she goes so far as to dream of Dinner on Mars being read in future classrooms of Mars University. “They'll be looking at it and critiquing it to see how wrong we were.”