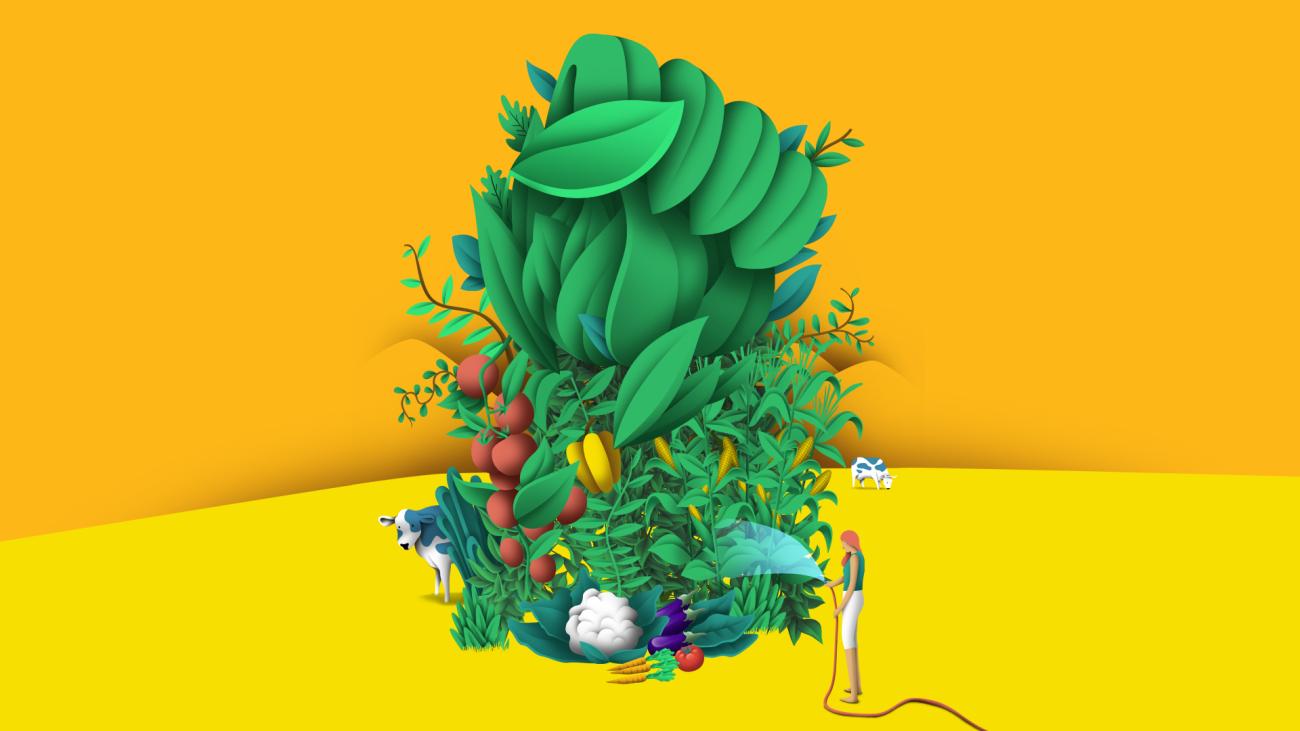 The struggle for agricultural reform and food sovereignty.

Hannah Wittman grew up on her family’s grain and cattle farm in northern Idaho, an independent dryland operation raising a diversity of crops. The land is now stewarded by her sisters, brothers-in-law, and cousins, whose children are the fifth generation to farm it.

Today, Wittman is a professor working with UBC’s Centre for Sustainable Food Systems and the Institute for Resources, Environment and Sustainability.

“My family think it's pretty funny that I still study farming,” she laughs, noting that it was her departure from farming as a vocation that enabled her to see it more clearly, and develop a desire to conduct research that supports the protection, independence, and viability of small-scale and diverse family farming operations around the world.

After her college years at the University of Washington in Seattle – where she earned a dual degree in international and environmental studies – Wittman joined the Peace Corps and went to Paraguay to support sustainable farming and agroforestry practices. She discovered that the struggles faced by small farms there mirrored the struggles her family’s farm had endured for decades.

The steady consolidation of agribusiness contributed to high levels of volatility in the global price of food, making it challenging for small farmers to compete in global markets. “The dynamics of the agricultural economy in Paraguay were the same,” says Wittman. “People were suffering the pain of commodity markets in the same way that my own family was.”

Over the past 50 years, many farms have experienced reduced autonomy over what they grow, where they sell, and what they can charge, especially when growing crops oriented towards global commodity markets such as corn, soybeans, and wheat. To survive the ever-tightening margins driven by large agribusiness, many farmers have become locked into a tight funnel of agricultural inputs – seeds, pesticides, animal feed, plants, chemical fertilizers, equipment and technology – controlled by just a few large corporations.

To appreciate how large agribusiness dominates the food market, consider the consolidation of the seed industry. For thousands of years, seeds were freely shared by neighbours and distributed by governments to maintain a healthy and diverse stock of crops for local and regional markets. But today, according to a 2020 special report by Hendrickson et al for the Family Farm Action Alliance, half of the global seed market is controlled by four multinational biotechnology corporations, and according to the U.S. Food and Drug Administration (2020), more than 90 per cent of all soybeans and corn planted in the U.S. is genetically engineered. Farmers are left with little choice but to buy the inputs the market affords them.

On the other end of the food chain, the consolidation of food processors and distributors have forced farmers to accept lower prices for their crops. On top of this, events well beyond their control – for example, a war or unfavourable weather – could suddenly reduce yields, and therefore income, below survivable thresholds, meaning small farms that have survived for generations could be wiped out overnight.

Because large agribusiness has such a large influence over both the price of food and the availability of inputs, even a favourable market doesn’t guarantee a profit for farmers. “We have record high grain prices right now,” says Wittman, “but many farmers still are not making a profit because they're locked into an industrial input system where prices are also rising rapidly.”

When the global agribusiness sector shifts focus from growing food to growing profits, the quality and variety of the food supply inevitably suffers. An emphasis on short-term profit rather than long-term stability, and agricultural technology that is oriented towards the most common commodity crops and large-scale precision agriculture, is not fertile ground for diverse farms that can sustain themselves for generations

Wittman’s research group works with farming organizations, social movements, and urban-rural food networks across the globe to develop tools and policies that bring diversity back to the food system. These networks aim to support small farmers make a sustainable living through agroecological transitions that improve soil conservation, democratize access to technology, and support local market development for healthy and sustainably produced food.

At the UBC Farm, Wittman and her colleagues research soil health and organic management practices. “If farmers can rely less on chemical inputs they have to buy from an external party, and more on soil fertility practices such as cover crops and diversification, then they're going to be better off in terms of resilient yields, especially in our changing climate,” Wittman says.

During the early 2000s, when she was doing her master’s thesis fieldwork in Guatemala, Wittman explored the country’s rich history of Indigenous community governance over shared forests, and how new government forest management regulations reduced community control over traditional territories. This governance shift led to an increase in deforestation and contributed to the growth of unsustainable and environmentally harmful farming practices, as well as economic hardship for the local communities that had relied on traditional agroforestry practices for generations.

For her PhD, Wittman conducted research with the Brazilian Landless Rural Workers Movement, who were designing ecological land reform settlements through land redistribution, cooperative land management, and agroecological diversification, including communal forest management. This approach to agriculture is based on the framework of food sovereignty – the basic principle that local people should have control over their own food systems. This means they need access to land, the infrastructure to work the land, and a viable system for locally controlled food distribution and exchange.

It goes beyond subsistence farming; food systems must support people in urban areas, as well. Some cities have publicly owned food hubs that serve as distribution centres for local foods. Beyond farmers’ markets, which sell small amounts of food to urban people who can afford it, cities need large-scale food distribution networks like the Ontario Food Terminal, which transports local produce to larger markets, and where growers have a say in the price of their goods. Initiatives like community-supported agriculture, local food hubs, and institutional procurement work to localize the food system.

Governments and other organizations could do more to promote sustainable practices and food security. British Columbia, for example, has no public food distribution network. Government investments instead support infrastructure for international markets, including deep-water ports and pipelines. These are essentially political choices being made to support international trade over local control.

“Governments are making choices about where to spend their money,” says Wittman, “and where governments have chosen to spend their money in relation to agriculture has tended to benefit certain sectors over others. Those have been political decisions with serious consequences for both people and nature.”

Agriculture is one of the greatest contributors to climate change, agricultural workers are among the more impoverished on the planet, and food insecurity among food workers is rising at an alarming rate. As the global climate deteriorates, we are committing ourselves to one of the worst humanitarian crises in history if we do not make a seismic shift in how we grow and distribute our food.

Changing the status quo, says Wittman, will take the redistribution of land based on social and ecological criteria for local food production, with particular attention to returning lands stolen from Indigenous people across the globe as part of both historical and contemporary processes of agricultural colonization.

Some governments have sought to reverse the tide of corporate farming by redistributing unused public or private land to small farmers. Wittman cites Brazil in particular, which has been a leader in redistributing land based on need; if land is being held speculatively, the government can expropriate it and redistribute it to landless farmers.

This was part of a broader policy called “Fome Zero” or “Zero Hunger” that the progressive president Luiz Inácio Lula da Silva implemented after he was first elected in 2002. This integrated food systems framework supports sustainable production, ecological restoration, food security for all people, and training for the next generation of farmers. A holistic, locally managed approach to growing food, processing food, and getting food into local markets ensures that people have enough to eat, the environment can continue producing food for tomorrow, and people who participate in the food system can earn a living wage.

Brazil’s systems-oriented approach to food and agriculture is starting to become more common in Canada and other places, says Wittmann. “We now have a national food policy council, and that's replicating what was proposed by Brazil all those years ago.”

Even though Brazil reverted to a right-wing government that defunded parts of the local-farming infrastructure (before bringing Lula back in the 2022 election), many of the progressive food sovereignty laws remained on the books, including “the right to food” addition to their constitution.

It’s this sharing of sustainable practices that offers the best path to a food-secure future. “That’s what we're doing with our food systems programs at UBC,” says Wittman. “We're trying to take an integrated approach so that students are trained holistically in what it takes to support a sustainable food system. It's not just about the latest technology, it's not just about the way to grow food, it's not just about a more efficient distribution system – you have to take all of those things together, and you have to teach it to the next generation.”