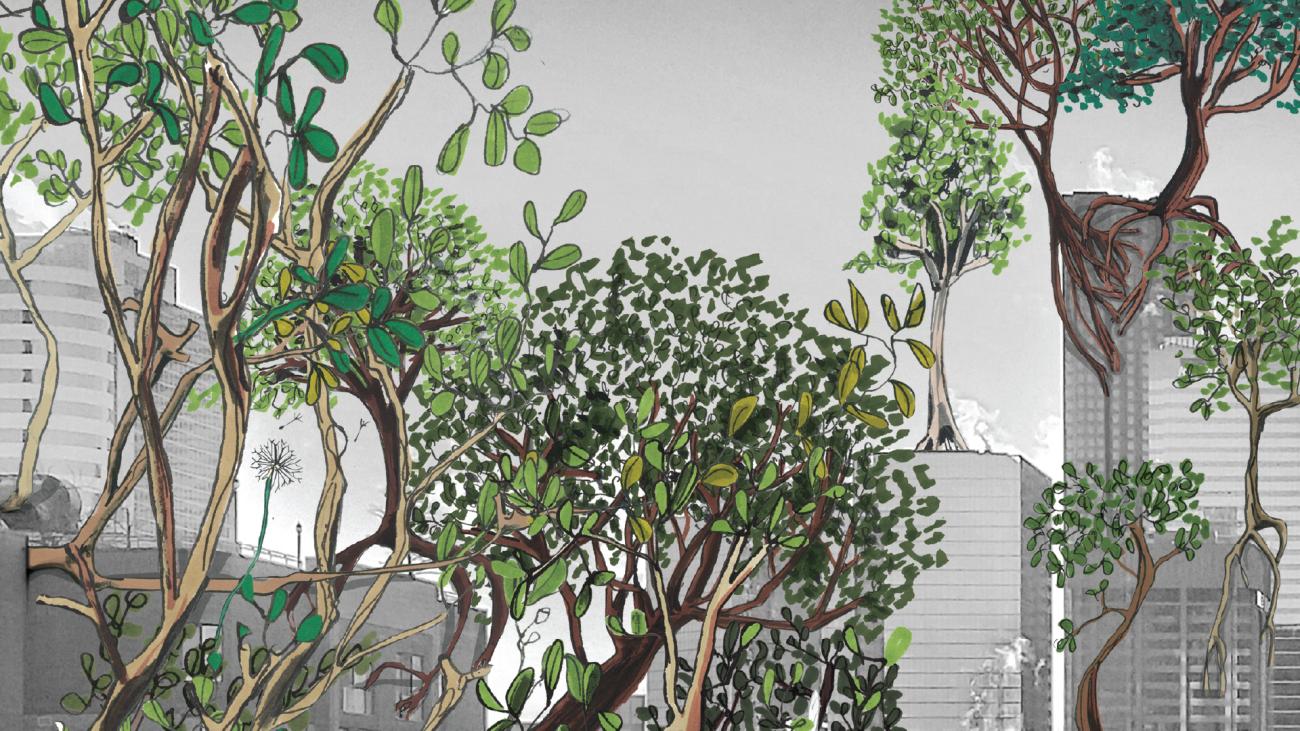 After years of research, a wood scientist, a mechanical engineer, and a chemical engineer have invented a new way to protect cities from climate change: turning buildings into giant trees. Or at least, their invention can make some buildings do some of the things that trees can. The team behind the “Developing Artificial Trees for Extreme Weather-Resistant Cities” project is developing a tri-layer film that can absorb water from the ground and release it into the air, the same way the roots, trunks, and leaves of trees do. When stuck to urban structures, this film could help soak up water during floods and keep cities cool in scorching weather.

“We were prompted by increasingly frequent extreme weather,” says co-lead Dr. Jongho Lee, an assistant professor in the Department of Civil Engineering. “We thought, ‘If only there were more trees, we could minimize the damage.’”

Lee is developing the film along with assistant professor Feng Jiang, a Canada Research Chair in Sustainable Functional Biomaterials based in the Faculty of Forestry, and associate professor Simcha Srebnik from the Department of Chemical and Biological Engineering, with backing from the federal New Frontiers in Research Fund. The inspiration for the project came from Lee’s previous experiments fabricating artificial mangrove trees as a way to turn salt water into fresh water. But desalination is just one of the myriad things trees can do, Lee observes. They also absorb excess rainwater and act as natural AC units.

Thus, motivated by a year of both heatwaves and floods, Lee and like-minded scientists from three different university departments have set out to turn entire cities into forests. Their film can be applied to apartment buildings, warehouses, support columns, and pretty much any other static structure, transforming them into giant artificial trees. The film is actually a set of three separate materials, each mimicking a different natural process: The first layer, a tight membrane, acts as a root system, sucking up water from streets and gutters, while rejecting contaminants. The middle layer acts like a trunk, transporting water up the side and roof of a building. Finally, a top canopy surface allows the moisture to be evaporated through microscopic pores, just like real leaves.

“Nature is a great teacher,” says Feng Jiang, who has studied the molecular structure of wood, and focuses on the structural elements of the tri-layer film. His research program aims to mimic nature and develop high-performance materials out of its abundant resources, with examples ranging from super-strong cellulose fibres inspired by spider silk and lightweight porous materials inspired by wasp nests. Revolutionary synthetic materials, such as strong and tough composites, he says, are the result of generations of studying what nature has done for eons. “If nature can make those beautiful, strong, and lightweight materials, why can’t humans make them?”

In making the tri-layer film, Feng’s chief challenge is materials selection. While the film can be easily fabricated out of petroleum-based polymers, this presents problems, such as plastic pollution. “We don’t want to solve one problem by creating another one,” he says. To avoid the issue, the team is once again looking to nature by experimenting with nature-based materials, such as cellulose, which is the structural component of actual wood and could be a way to make the film layers both durable and biodegradable.

The team believes the film could eventually be mass-produced, but there are still a few kinks to work out. For one, the film is not particularly attractive, commented Lee; people might be reluctant to stick it to their apartments and city landmarks – though it would likely be fine for existing eyesores, such as factories and water towers.

An alternative to attaching the film, says Lee, is to incorporate its functional structure into the building blocks used for construction.

The specific form their invention takes is secondary. The most important thing is to stop battling nature and start learning from it – before it’s too late. Last year’s Pacific Northwest heatwave killed at least 1,400 people. A few months later, in the same region, torrential rains and severe flooding caused more deaths and billions of dollars in damage. And those events may only be the start. If our cities are going to weather what is coming, we are going to have to adapt wherever we can, even if it means converting our cities into artificial forests.

“This is a crazy idea, I know,” Lee says. “Nature has lots of crazy and fascinating features. It’s natural that we can get great ideas from nature.”