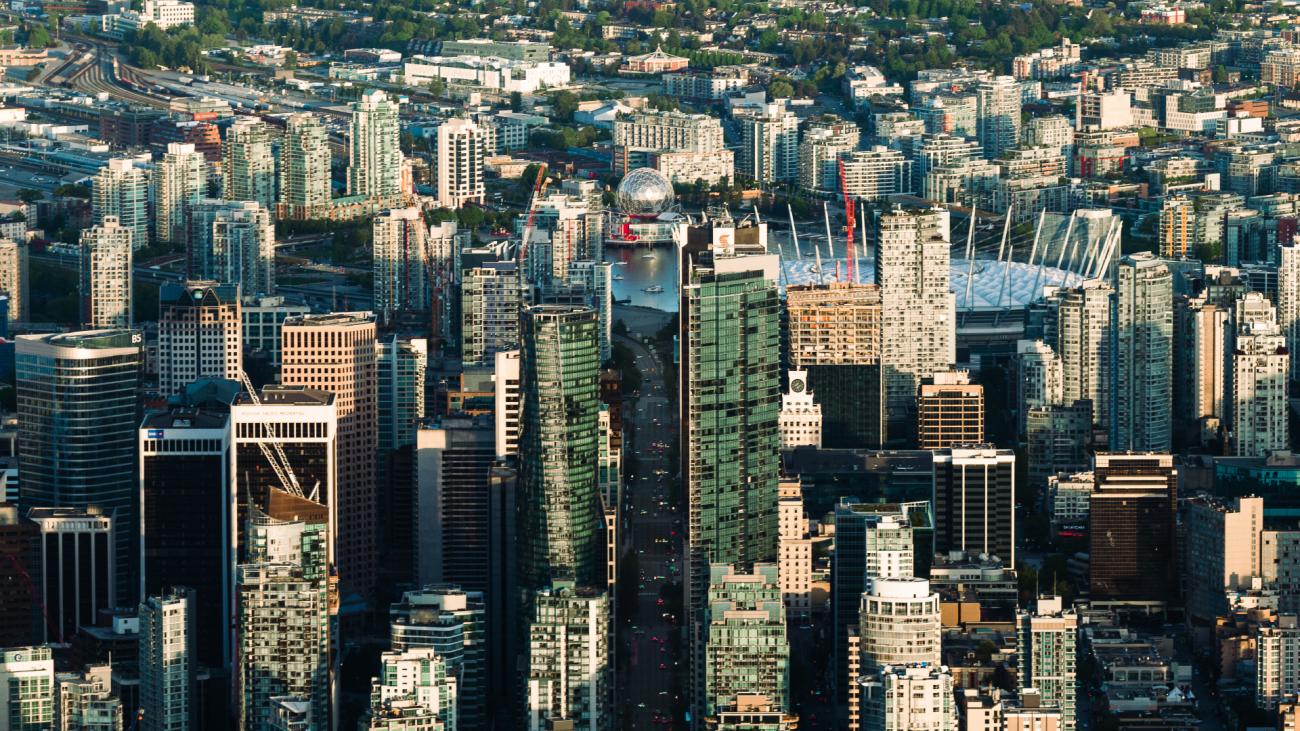 A photograph of Vancouver taken from a helicopter above the Stanley Park area. It shows West Georgia Street, with False Creek and Science World at the end, and East Vancouver in the background. Photo: Jeremy Lee (@jw.klee)

There may be no such thing, but Vancouver has shown the world an admirable model.

Vancouverism – it seems almost un-Canadian. There is a boast-worthy notion that there is something about the city of Vancouver that is so unique – and so fabulous – that it is worth imitating. And it’s not just the mountains and the sea (which are difficult to emulate). It’s the urban planning, the livability.

Late in the 20th century, when many North American cities were beginning to regret having built massive freeways into hollowed-out downtowns, planning theorists started to look at Vancouver as an alternative expression of the urban ideal. Here was a city centre that was unusually dense and – for drivers, at least – comparatively inaccessible. It also featured a jumble of residential and commercial developments, “conflicting” elements that planners in other cities had been carefully separating for decades. Yet, people seemed to love it – even people with children, who we once thought would never want to sacrifice their suburban back yards.

“Somewhere in the 1990s, you started to hear about ‘Vancouverism.’ We were creating stuff that people talked about.” The speaker here is Larry Beasley, CM, (MA’76), Distinguished Practice Professor of Planning at the UBC School of Community and Regional Planning (SCARP), and author of Vancouverism, a comprehensive textbook on the history and principles of this new planning paradigm. As a co-director of planning at the City of Vancouver during the years when Vancouverism emerged, Beasley was also a hands-on author, guiding some of the most complex planning and consultation processes the city had ever seen.

Yet today, Beasley is quick to distribute credit for Vancouver’s success, even while questioning the city’s status as a replicable model for innovative, sustainable, and livable urban development. “I don’t think there is an ideal city,” he says. “A city is the most complex invention of the human mind – an organism in a constant state of transformation.” And, he stresses, anyone who tries to apply Vancouver’s solutions in another city is almost certain to fail.

Before exploring the planning phenomenon, it’s worth noting the grandeur, and the limitations, of the topography on which Vancouverism emerged. Vancouver’s natural environment was always extraordinary – as Beasley puts it, “a nice setting in search of a city.” But the mountains, the ocean – and the nearby border with the United States – do more than add drama: they compress development. While other cities spread suburbs in every direction, Vancouver has had to accommodate its rising population in a constricted space.

So, even before the late-century boom that brought such rave reviews, Vancouver’s downtown peninsula featured one of the densest and most walkable neighbourhoods in the country. The tight mix of homes, services, and workplaces made it a convenient and functional “15-minute city” long before anyone coined the term. Ann McAfee (BA’62, MA’67, PhD’75), Beasley’s City Hall partner as co-director of planning, did her master’s thesis on apartment-living in the West End in the early 1960s, finding it a model for high-density living.

“A city is the most complex invention of the human mind – an organism in a constant state of transformation.”

But this happy status was under threat. Vancouver’s first chief planner was a big-highway fan named Gerald Sutton-Brown. In an era when City Hall thought it knew what was good for you, he pushed for automotive domination. For example, expensive viaducts into downtown were built, creating a speedway entrance that was supposed to connect to a major freeway once they paved over the low-income neighbourhoods of Chinatown and Strathcona.

It was a turning point. The community rose up, blocking the freeway and overthrowing the top-down denizens of City Hall. Working with UBC geography professor Walter Hardwick (McAfee’s thesis advisor), a young firebrand named Art Phillips (BCom’53) formed a new political organization called The Electors Action Movement (TEAM). The two men won seats on council in 1968, and by 1972 Phillips was the popular new mayor, with TEAM holding eight of 10 council seats, including those of UBC professors Hardwick, Fritz Bowers (engineering), and Setty Pendakur (planning), as well as future Vancouver mayor and B.C. Premier Mike Harcourt (BA’65, LLB’68, LLD’07). They fired Sutton-Brown, cancelled the freeway, and hired an English planner named Ray Spaxman, whom Beasley and McAfee both credit as the originator of the consultative planning style that changed the face of the city. Then, they set about answering what McAfee poses as an existential question: “If we’re not freeway people, what are we going to do?”

The next transformative moment came when the provincial government bought and cleared the industrial north shore of False Creek for Expo ’86, an international party that brought Vancouver world attention, followed by a burst of investment. It also opened a spectacular redevelopment site of more than 200 acres – a grand canvas for planners, architects, and community builders.

What emerged was both beautiful and livable. Leveraging McAfee’s expertise in research and analysis, and Beasley’s flair for consultation and negotiation, Vancouver City Hall learned to estimate how much rezoning would raise land values. Then, whenever Council approved a new development, it demanded a share of that “uplift,” using the money for services, parks, and other community amenities in high-rise neighbourhoods where people then wanted to live, work, and play.

The design style was also new and reflected community appetites. Understanding how fiercely protective Vancouverites are of their views, architects and developers built tall, thin towers with maximum window space for residents and minimal obstruction for the neighbours. (These “point towers” also reduce the shadowing that can turn high-rise neighbourhoods into cold, dark canyons.) And they built those towers on three- to five-storey podiums, making space for commercial developments and townhouses for low-rise living, which enlivened the street level.

The mixed-use “tower-and-podium” style became so closely associated with Vancouverism that some planners started presenting them as one and the same, exporting the form as an all-purpose solution. Consider, for example, the Dubai Marina, where developers in the United Arab Emirates excavated a patch of desert to create a false False Creek – complete with a seawall and an array of tower-and-podium buildings that exactly mirror Vancouver’s Yaletown waterfront. It worked, in the way that Disneyland works, giving tourists someplace to celebrate and expats an attractive neighbourhood in which to buy condos, but it hardly qualifies as a model for good Gulf Coast city building.

For that, you can take the train south to Abu Dhabi, where Beasley was hired in 2006 as a special advisor to the Crown Prince, Sheikh Mohamed bin Zayed Al Nahyan. When planning to redevelop the urban neighbourhood of Al Shahama, Beasley recruited another City of Vancouver veteran, Michael White, now UBC’s chief planner (AVP, Campus and Community Planning).

White says: “The first thing we said was, ‘Let’s talk to the people.’” To which the illustrious clients replied, “Why?” White explained that consulting residents is instrumental in getting a plan right the first time. Al Shahama had thousands of residents and a dearth of housing diversity, services, and transit. If planners’ solutions didn’t meet demand, it would be even more difficult and expensive to make corrections. As Beasley has said, “Our mission was not to implant a way of life from somewhere else, but rather to realize the cultural potential of these people in this place and at this time.”

White says he came back from the experience more convinced than ever that, “Vancouverism is not about tower-and-podium; it’s about engagement,” a lesson that he continues to apply in building the amenity-rich neighbourhoods at UBC.

The other commonly cited Vancouverism fundamental is sustainability, a notion the city celebrated prematurely in the early 2010s as Vancouver promoted its aspirations to become “the Greenest City in the World.”

Andrea Reimer, a Vision Vancouver councillor from 2008 to 2018 and now an adjunct professor at the UBC School of Public Policy and Global Affairs, says that she came to realize that “green doesn’t necessarily mean sustainable.” Sustainable has a literal definition: it’s something you can keep doing forever. Whereas, Reimer says, often what we consider “green” development is nowhere near that superlative; it’s just better than the standard of the day.

“For the average person on an average day, Vancouver is amazing. For the vulnerable, it’s a grind. And a disheartening one when they’re told they are living in paradise.”

Similarly, she says, Vancouver’s vaunted status as one of the world’s most livable cities doesn’t translate for everyone. “Setting aside the lucky people who own their homes and have choices – Vancouver is not working that well. It is, for example, not better than Calgary. For the average person on an average day, Vancouver is amazing. For the vulnerable, it’s a grind. And a disheartening one when they’re told they are living in paradise.”

That, then, raises the question of what cities need now. Reimer’s first prescription is that senior governments have to get more involved in helping cities solve their problems or, even better, hand over the authority to raise funds and set rules.

Canadians are flocking to cities. The most recent census shows downtown populations growing at more than twice the base rate. Yet senior levels of government have spent decades devolving responsibility for everything from housing to the management of drug addiction.

No surprise, then, that the international cities that are outperforming Vancouver – say, Vienna, Stockholm, or Amsterdam – are technically provinces or city states, with more taxation authority and regulatory powers. Malmo, Sweden, for example, has a population similar to Victoria’s, but a budget four times as large. Canada’s cities need resources to address their problems, Reimer says.

Vancouver’s other potentially devastating weakness is what Professor Thomas Davidoff describes as “excessively low density,” which has driven land values beyond the purchasing power of all but the super rich. Davidoff, director of the Centre for Urban Economics and Real Estate at the UBC Sauder School of Business, says it is perverse to celebrate the livability of our dense downtown while preserving 70 per cent of the city’s land base for single-family dwellings. This consumptive and exclusionary planning style “was probably never a good idea, but it certainly doesn’t work now,” Davidoff says, adding that if Vancouver is to remain livable, it will have to break the political stranglehold that has held all but the downtown in a 1950s planning style that serves only those who are already landed.

As Beasley says, “There is no static state of grace.” In the search for the ideal, “every solution will still be unsatisfactory in the delivery, and my solutions will not be ideal for this generation.”

It’s wonderful that people have recognized Vancouver’s success, he says, “but we were never angling to be a global model, we were just trying to fix what was broken.”

And, facing a whole new set of challenges – affordability, inequality, climate change – Beasley says it would be arrogant to think we have already found the solution. “We need to get back to the grindstone to deal with our issues.” Only then might Vancouverism continue to be considered ideal.

Larry Beasley is the UBC expert study lead for alumni UBC’s Travel Club tour this September to Copenhagen, Malmö, and Stockholm. The tour will focus on the primary themes of modern urbanism – livability, sustainability, affordability, and competitiveness. See alumni.ubc.ca/travel for details.