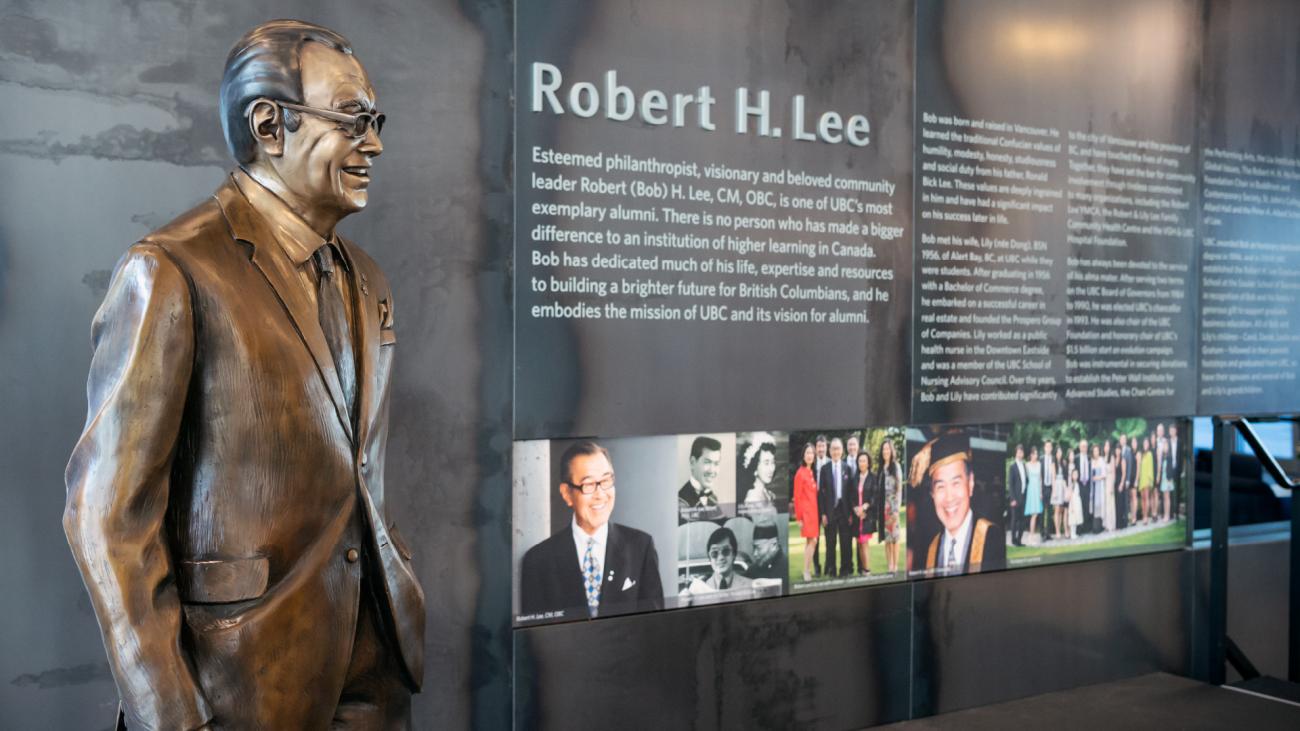 A bronze statue of Bob Lee now graces the foyer of the alumni centre that was named after him.

Bob helped transform UBC from a geographically isolated commuter campus into a world-leading university – one with 24-hour life, complete with everything to support a vibrant community for residents to live, work, and study.

One afternoon, sometime in the ’90s, I was walking across campus to the President’s Office. I was editor of TREK magazine, in those days, and was trotting the latest issue, hot off the press, to then president Martha Piper. Just as I was turning off Main Mall to the Old Admin Building, a sleek, aubergine-coloured Bentley drew up beside me. The window rolled down and I heard a voice call out, “Hey, Chris!” It was Bob Lee.

I’d written some speeches for Bob, because he was the university’s chancellor. We chatted for a moment about this or that – I remember complimenting him on his spectacular tie – then we waved goodbye, and he drove off.

That, for me, was Bob Lee. But that was Bob Lee for everyone – a guy equally at ease with premiers, CEOs, university presidents, and lowly editors. Jimmy Pattison, arguably Canada’s most successful businessperson, described him as “one of the nicest guys in all of Canada,” and “first class in every way.”

When Bob died in February 2020, the loss was felt deeply at UBC, and not just from an institutional point of view. Bob’s great skill was in forming lasting relationships. Students he’d mentored, administrators he’d advised, faculty he’d supported, staff he’d befriended, and a lowly speechwriter – all felt his loss on a personal level.

Robert H. Lee, CM, OBC, was born in Vancouver in 1933 to Ronald Bick and Gin King Choon Lee. He was number six of seven children. Bick Lee ran a successful import/export company in Chinatown and became a trusted fixture in that community: honest in business and as a friend. These ideas of service to community and honesty in business dealings became core elements of Bob’s working philosophy.

He graduated from UBC with a commerce degree in 1956 and joined the family business. But he continued to study and earned his real estate license in 1959. In 1964 he facilitated a deal for a Hong Kong businessman, David Lam, to purchase an apartment building north of Denman Street. Bob said he was the only real estate person in town who spoke Cantonese, so he got the lead. It was a big transaction, reported in the newspapers of the day. “I was shaking when I handed over the contract to sign,” Bob once confided. “I made 10 times my annual salary in that one deal.”

It started him on a spectacular business career. In 1966, he co-founded Wall Financial Corporation with Peter Wall and Peter Redekop. Quoted in a Vancouver Sun obituary, Wall said of Bob, “I don’t know of a better business person than he was. He was generous, but at the same time he could be very strong and definite about things. I can’t say enough good things about him.”

Bob struck out on his own and founded Prospero International Realty in 1979. The company went on to become a major player in the Lower Mainland, Western Canada, and the U.S.

By the 1980s, UBC had fallen behind both in facilities development and the ability to generate its own funding. In 1984 Bob joined the UBC Board of Governors. (As he remarked later on, “My four children graduated from UBC, their partners, my wife and me – so when nine of us graduated from here, I thought, ‘I have to help out.’”) David Strangway joined UBC as president the following year.

The two men would have a profound impact on the university, a key ingredient being Bob’s invention of UBC Properties Trust. His intent was to leverage the University Endowment Lands, established in 1907 as a means of raising capital for the fledgling university. Strangway saw his presidency as an opportunity to reimagine UBC as, in his words, “a world class university,” and provided a good deal of the impetus for the development of the lands.

Their plans met resistance. UBC had a reputation as a good regional university that served its constituency well. Many felt that the kind of growth Strangway proposed would rob the university of its identity and turn it into another big educational factory. But Strangway knew that in order to survive in a fast-changing world, where competition for the best and brightest – both students and academics – was becoming increasingly fierce, UBC needed to generate its own money.

Bob’s idea was to use the university’s 1,000-acre endowment of land as it was originally intended: to generate funding. He proposed that 99-year leases on parcels of this land be given to developers for market housing, with profits generated coming to the university. With the enthusiastic support of David Strangway and the UBC board, he created UBC Real Estate (later named UBC Properties Trust) as a vehicle to enact his plan.

He convinced Strangway to develop a few acres at Wesbrook Mall and 16th Avenue, which would come to be known as Hampton Place. As Strangway was to note, “This idea of the university going into business to build development projects to support the university was a very unusual thing.” But ultimately, the concept would be adopted by universities across the continent.

Although Strangway also launched a more traditional (and spectacularly successful) fundraising campaign – “A World of Opportunity” – in 1989, which raised $260 million over five years, the money was tied to specific (albeit vital) purposes: a chair in physics, a piece of equipment for a biology lab, a specialized building. Little was raised for discretionary purposes, or money to use as the university saw fit.

While hugely controversial, the development of Hampton Place in 1988 would generate more than $80 million for UBC’s endowment fund. This led to the development of more university neighbourhoods. When he created the Trust, Bob predicted that the development plans would ultimately generate $1 billion in funding for the university. To date it has earned close to $2 billion and is forecast to generate $4 billion. As his daughter, Carol Lee (BCom’81) said, “He got a lot of pushback at the time. But Dad was always willing to go the last mile to get things done."

Al Poettcker, whom Bob brought on to the Trust’s board in 1988 and who became president and CEO in 1996, praised Lee’s vision. “Bob understood that developments that create all aspects of a community – rentals, market housing, commercial spaces, community parks and services – determine its vibrancy.” Today, the now mature neighbourhoods south of Thunderbird, including Wesbrook Village, are bustling testaments to his vision.

Describing Bob’s initial pitch to the Board and to developers, Randy Zien, chair of the Trust from 2012 to 2021, said, “Bob was determined that the university’s land would never be sold. Initial developers were leery about this: ‘How can we convince people to buy on leased land?’ Bob took the long view. He convinced them that the project couldn’t lose. He had that kind of reputation. People trusted his judgement.”

In 2014, the soon to be completed alumni building was officially named the Robert H. Lee Alumni Centre. Then president Stephen Toope said, “I call him ‘Mr. UBC.’ His profound dedication and uncanny ability to build relationships and solicit new supporters has helped UBC grow into the university it is today.” A bronze statue of Bob now graces the centre’s main foyer, both as a tribute to his tenacity and a reminder to all that an individual’s dedication and vision can have dramatic impact. Carol Lee, who now serves as a board member of the Trust, sums up Bob’s service to the university: “For him, philanthropy wasn’t just about writing a cheque. It was about participation and involvement.”

For me, Bob’s life was a testament to the idea that humility, trust, and good humour can coexist with success, power, and influence. Or, as one commenter on his life succinctly remarked, “you don’t have to be a jerk to get ahead.” Over its history, UBC has been shaped by the vision of remarkable men and women from every era who have given their time, creativity, and resources to create an extraordinary institution. Bob Lee stands with the very best of them.