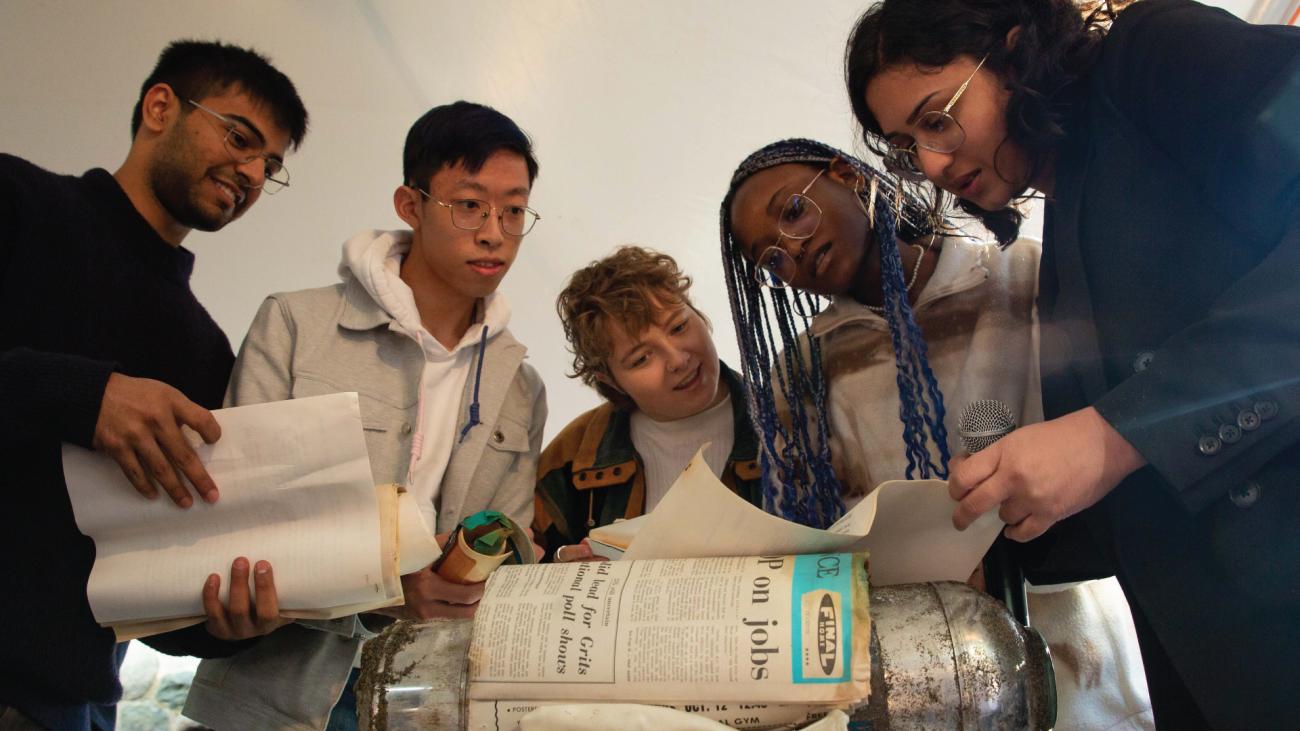 UBC students take a first look at the contents of the Great Trek time capsule. Photo by Isabella Falsetti / The Ubyssey.

This article is republished from The Ubyssey with permission. Read the original article.

The UBC Alma Mater Society (AMS) unearthed a 1972 time capsule and put a new one in its place celebrating the Great Trek on October 28, 2022. The event took place at the Great Trek Cairn on Main Mall at the Point Grey campus and included speeches from notable former AMS executives on the importance of student activism.

The event marked the 100 year anniversary of the Great Trek, a protest organized in 1922 by the AMS to push the government to start construction on UBC’s current campus. Students gathered 56,000 signatures before the AMS president at the time led protesters from Fairview to the half-built Chemistry Building at what is now the Point Grey campus. This, along with AMS advocacy in Victoria, pushed the provincial government to commit $1.5 million to the new campus.

“[This day] marks the anniversary of the first big win that students ever had on this campus," AMS President Eshana Bhangu said.

A speech by 1972/73 AMS President Gordon Blankstein before the capsule was unearthed touched on 1972 tuition and living costs, music performances from the likes of Billy Joel and Frank Zappa, and other notorious accounts of his time at UBC, putting the 50-year time difference in perspective.

“I'm a little terrified of what might be in the time capsule," Blankstein said. "I hope there's nothing offensive to anybody because it was definitely different times."

Event speakers dug up the time capsule, and current students opened it. It included several magazines and newspapers from the day, including a copy of The Ubyssey. It also had a student registration list, some postcards, and an invitation and the menu from the 1972 Great Trek Ceremony to bury the capsule.

There was also a copy of an engineering publication The Red Rag which Bhangu described as "PG-13 content."

All the items will be displayed in the AMS archives on the third floor of the Nest.

Reflections on a colonial past

The Great Trek, while an iconic moment of student activism at UBC, was colonial in nature — a fact speakers at the ceremony didn't shy away from.

“[The Great Trek] only perpetuated the idea that what is now B.C. and what is now Vancouver, what is now UBC, was empty land free for the taking, and also further excluded our people from this type of decision making,” said Jordan Wilson, a representative for Musqueam Indian Band.

Wilson said he believes the relationship between the university and Musqueam has changed for the better.

“On first glance, [Musqueam house posts and artwork] might seem like window dressing or decoration. But to my mind, these initiatives…speak to the way the relationship [between UBC and the Musqueam Nation] is transforming.”

Wilson put photos of significant events with Musqueam people at UBC, a booklet about the history of Musqueam and Indigenous communities, and an orange shirt that says "Every Child Matters" in hən̓q̓əmin̓əm̓, the Musqueam language, into the new time capsule.

Kim Campbell, former prime minister and former AMS executive, also spoke at the event about the privilege of interacting with students from different faculties during her time working for the AMS. She also mentioned the importance of thinking and advocating for beyond our own time.

“Can we develop that way of thinking as the Great Trekers did in a way to try [and] create something that they would not live to see?” Campbell asked.

Herb Dhaliwal, former minister of natural resources and vice-president finance of the AMS, addressed students in particular, speaking on how consequential student activism is.

“Education is very important but you need to get involved in all the other issues and participate. You can make a difference,” Dhaliwal said.

New time capsule to be opened in 2072

Along with the Musqueam items, every undergraduate society placed objects into the new time capsule. UBC also contributed an alumni UBC strategic plan, a letter from Santa Ono, and a bow tie.

The AMS added menus from all its current food outlets, a KN95 mask, a copy of The Hundred-Year Trek by AMS Archivist Sheldon Goldfarb, and letters from students. After the ceremony, they added a copy of The Ubyssey.

"I think it was really cool to see how easy it was to differentiate between the items…. It's very team pride,” said Kinesiology Undergraduate Society President Ivran Rai after the event.

Bhangu closed the event by calling on future students to continue the work of student advocacy.

“I think this is a testament to student advocacy and student activism, and we really, really hope the next 50 years bring so much more of this.”