Career trailblazers: How two Indigenous women are leading the way 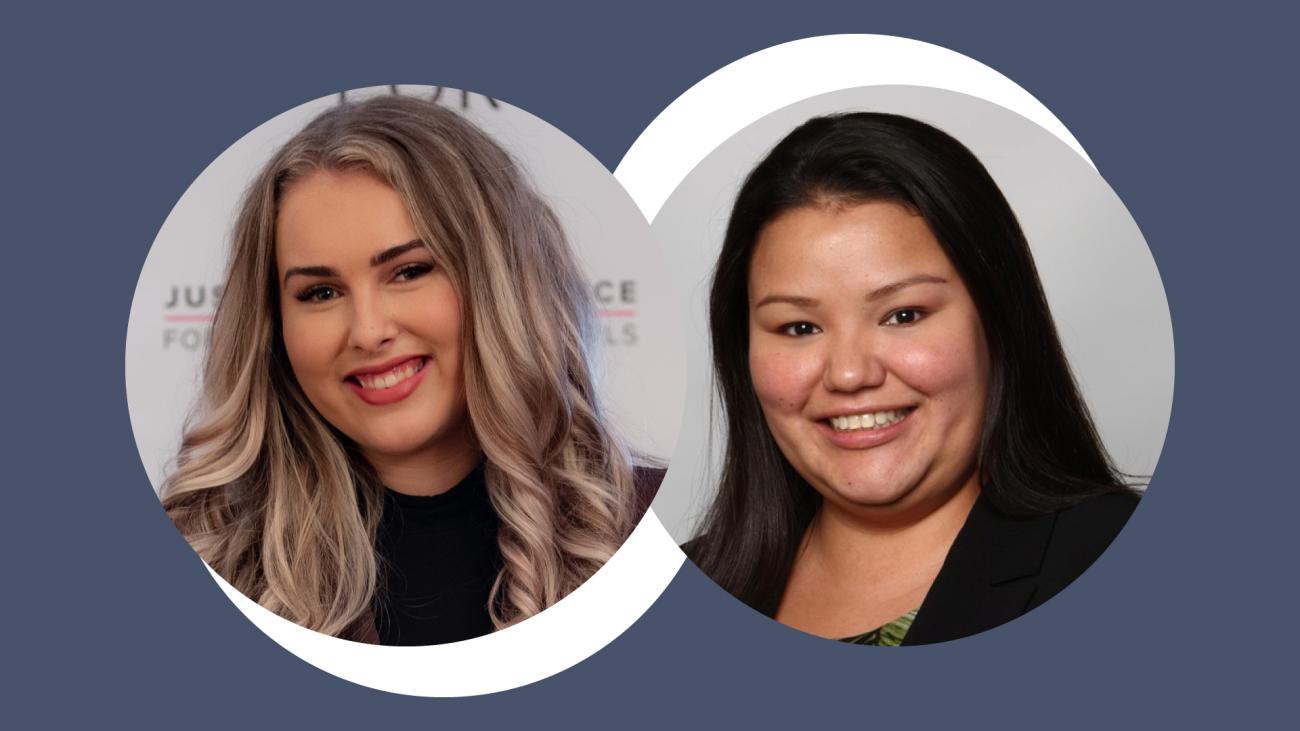 When Candice Loring (BMgt’16) of the Gitwangak Band from the Gitxsan Nation was 27 years old, she attended a meeting that changed the trajectory of her life.

By chance, she joined a friend who was meeting with UBC Okanagan’s Aboriginal Program Administrator Dan Odenbach. Odenbach spoke about the Access Studies program, which offers flexible learning options that don’t require enrolling in a degree program or undergoing the standard admissions process.

As he spoke, Loring suddenly realized that, as a Grade 10 dropout and stay-at-home mother, she was eligible. After the UBC Okanagan Bachelor of Management Program accepted her, she became deeply determined to make the most out of her time at university.

“I knew that every minute I spent on campus in class or studying was a minute away from my boys so I made sure that I made every single moment count,” she explains.

Driven by this goal, Loring became president of UBCO’s Indigenous Student Association for four years, was a Ch’nook Scholar in her third year of her undergrad, and was named UBC Okanagan Woman of the Year in 2014.

Yet, had she missed that meeting with Odenbach, she might not have known about that second chance at education.

That’s why, Loring explains, raising awareness of opportunities that do exist — especially by and for Indigenous people — is vital.

Acknowledging where Indigenous people are on their path to pursuing educational or career goals is essential because, due to the ongoing impact of colonialism, many encounter barriers that differ from or are additional to those that non-Indigenous people deal with.

Researchers are delving into the systemic challenges that Indigenous women face. In a study published in May, UBCO professor Dr. Min Hu found that Indigenous women “have the worst of the worst when it comes to health conditions” in Canada. They also have worse health outcomes than their male counterparts when living off-reserve.

Other recent studies focus on the career-limiting complications opposing Indigenous women. A 2018 study by the BMO Financial Group found that Indigenous women entrepreneurs experience “prejudice, possible lack of support from community and family, lack of role models, more child and family responsibilities, and less access to training and high-speed networks on more isolated reserves.” In addition, a study by Canadian social-change company Impakt in 2017 added that those living on reserves may face additional obstacles like lack of property for loans and less access to employment and programs.

However, encouraging signs do exist within these studies. The BMO one found that Indigenous self-employment has been growing at twice the rate of the national Canadian average and “Aboriginal self-employed women show the more rapid growth.”

In addressing what can be done to improve prevailing conditions in education and careers for Indigenous women, two Indigenous alumni — Loring from UBC Okanagan and Zoë Craig-Sparrow (BA’18) from UBC Vancouver — share their thoughts about how media representation, progressive change, Indigenous-led leadership, and allyship can help.

Consider this: who comes to mind when you think of Indigenous women? Screen stars like Tantoo Cardinal (DLitt’20) or Elle-Máijá Tailfeathers (BA’11)? The Murdered and Missing Indigenous Women and Girls (MMIWG)? Managers, executives, and CEOs? Unfortunately, when it comes to Indigenous representation, the focus of mainstream media tends to be limited.

“I feel like there's a propensity for dominant society to sensationalize Indigenous trauma,” Loring says. “Having Indigenous people portrayed through mass media, through Hollywood movies, and always being perpetuated in stereotypical manners and stories…is part of the problem.”

Craig-Sparrow, a member of the Musqueam Indian Band and Director of Indigenous Rights and Environmental Justice at Justice for Girls, agrees. “So often in media and television, what little coverage and representation we see of Indigenous peoples is rooted in negativity, stereotypes, and colonialism.”

That’s why Craig-Sparrow is determined to tell new stories, especially ones that capture the diversity and strength of Indigenous perspectives. In fact, her career path illustrates how she found strength in finding her own voice — and amplifying those of others.

When she was just 12 years old, she began working with non-government organizations, such as Justice for Girls and the David Suzuki Foundation. At only 15 years old, she travelled to Geneva to attend the 2012 UN Committee on the Rights of the Child for their review of Canada. There, she spoke about “the disproportionate impact of climate change and environmental degradation on the rights of Indigenous girls.”

“It was then that I realized the value of my own unique perspective and that I could use my experiences and passions to make a positive change in the world,” she explains.

When the Aboriginal Peoples’ Television Network invited her to appear on U=US, a TV series about Indigenous youth making change, she agreed — and went on to co-host the series from 2012 to 2014. Since 2020, she has guest hosted First Talk, a talk show covering social and cultural issues from intergenerational trauma to beauty standards and dating. From her positions on those shows, she “learned the importance of celebrating positive news stories and Indigenous success.”

She also learned about the value of challenging the misconception that Indigenous women are always one homogenous group.

Learning about the damaging impact of internalized racism helped Loring overcome the negative images and narratives she’d seen growing up. She credits this learning to her late professor, Dr. Gregory Younging of the Opaskwayak Cree Nation, who helped develop UBCO’s Indigenous Studies program.

“It was through Dr. Younging’s teachings that I was able to turn all of my anger and feelings of self-doubt into understanding and pride of who I am as an Indigenous woman,” she explains.

Proving her potential, Loring has a track record of going above and beyond. After graduating in 2016, Canadian SME Business Magazine named her one of Canada’s most inspirational women entrepreneurs and business leaders in 2021, she made the list of Kelowna’s Top 40 Under 40 this year, and is pursuing an Indigenous Business Leadership Executive MBA at SFU.

She’s also one of two senior advisors of Indigenous relations and initiatives at the non-profit national research organization Mitacs. In this newly created role, developed in consultation with Indigenous community members, she’s responsible for leading the development and implementation of a long-term Indigenous peoples strategy.

Like Loring, Craig-Sparrow has had to transcend limiting stereotypes and a lack of representation. During her formative years, for example, she recalls not seeing Indigenous women in the schools and professional fields she was interested in.

Nonetheless, she completed her studies in political science and government at UBC and went on to achieve a Master’s in human rights at the University of London, where she’s now pursuing her PhD. She’s also a 2021-22 Environmental and Indigenous Rights Fellow at the David Suzuki Foundation. She’s addressing systemic issues that affect specific demographic groups. In her current role at Justice for Girls, she leads advocacy on cases dealing with “the disproportionate impact of climate change on Indigenous women and girls, supporting the rights of Indigenous land and rights defenders, and researching the connection between ecocide and genocide in Canada.”

Both Loring and Craig-Sparrow recognize the importance of being and having role models. Craig-Sparrow, for instance, has prioritized raising awareness about Indigenous women professionals, particularly at academic institutions and non-profits.

“I want other Indigenous girls to know that it is possible and that there are friendly and understanding faces there to support them,” she says.

In her capacity as a changemaker, Craig-Sparrow wants to help Indigenous youth realize their full potential: “As a big sister, I want my little sisters to know that, despite what society and statistics may tell them, there is nothing they cannot do, be, or accomplish.”

Under-representation in workplaces is being increasingly recognized and addressed on a wider scale. In an example of tackling this issue with Indigenous involvement, in March, the Canadian government announced funding for projects by the Native Women’s Association of Canada and the Women in Leadership Foundation to improve representation in federal workplaces and boost knowledge about barriers obstructing Indigenous women.

The truth about trailblazing

Forging new pathways can be inspiring. But it can also take a toll on those leading the way.

Loring knows what it means to break new ground — she’s the first person to hold an Indigenous-specific role at a national research and innovation organization. Although it’s “exciting and challenging,” she says it can be exhausting “when you feel like you’re the only one.” After all, she points out, her work is about decolonization, which involves “challenging the status quo.” And she’s also laying the groundwork for successors.

“The reality that comes with that is a great deal of onus is put on someone who holds that first position, because…how you allow yourself to be treated by others almost sets a tone or a standard of how things will happen for the next person,” she explains.

Although Loring recognizes that “everyone loves a good success story,” she adds that overcoming adversity isn’t always the end of the story. Every day, for instance, she still lives in a colonial-based society, is surrounded by intergenerational trauma, and copes with the loss of loved ones.

That underlines the importance of ensuring ongoing support and safe, inclusive spaces for people to be their “whole, authentic” selves.

“It's important to me…not having to be somebody I'm not, to ensure that I'm palatable to the dominant society,” she says. “And that authenticity has gotten me far in life.”

Similarly, Craig-Sparrow empowered herself by being who she truly is. “The main way I've overcome misperceptions is by being myself and challenging stereotypes and assumptions when I hear them.”

Leading with heart and humility

For those who want to help, Loring recommends embarking upon such undertakings with “humbleness, an open heart, and always just trying to do what’s right.” And, of particular importance, centering Indigenous voices.

“Nothing about us without us,” she says.

She also cautions against ego-based motivations, such as helping others as a means to advance your own career or garner attention.

“When you’re doing work on behalf of other people, it’s really important to honour that work and remember that it’s not about yourself — it’s about the people who you serve.”

“My biggest piece of advice in working with Indigenous women is that we do not need saviours — we need support and solidarity,” she says.

She adds that being supportive isn’t passive.

“Solidarity is actively educating yourself and using any privilege or platform you have to amplify Indigenous women’s and girls’ voices, to stand up to injustice when you see it, and to support and follow our leadership,” she says. “This is especially important when we talk about terms like ‘reconciliation’ and ‘transitioning out of genocide.’ The people who created the problem should not be trusted to determine the solution. It is Indigenous women and girls who must lead the way. And we’re ready…we just need people to listen, support, and follow.”

Loring adds that Indigenous girls and women shouldn’t let anyone hold them back from pursuing their dreams and recommends tapping into their ancestry.

“Understand how powerful you are once you can draw from your ancestors’ strength and knowledge,” she says.

To build a better future, Craig-Sparrow similarly advises Indigenous girls and women to find inspiration and strength from their Indigeneity, both past and present, to chart a promising path.

“No matter what has been thrown at us, we have survived with resiliency and grace,” she says. “Even being alive right now is an act of resistance and strength. Your ancestors and people are already proud of you and all you have overcome. There will continue to be challenges and barriers that you face, but believing in yourself and knowing your strength go a long way."