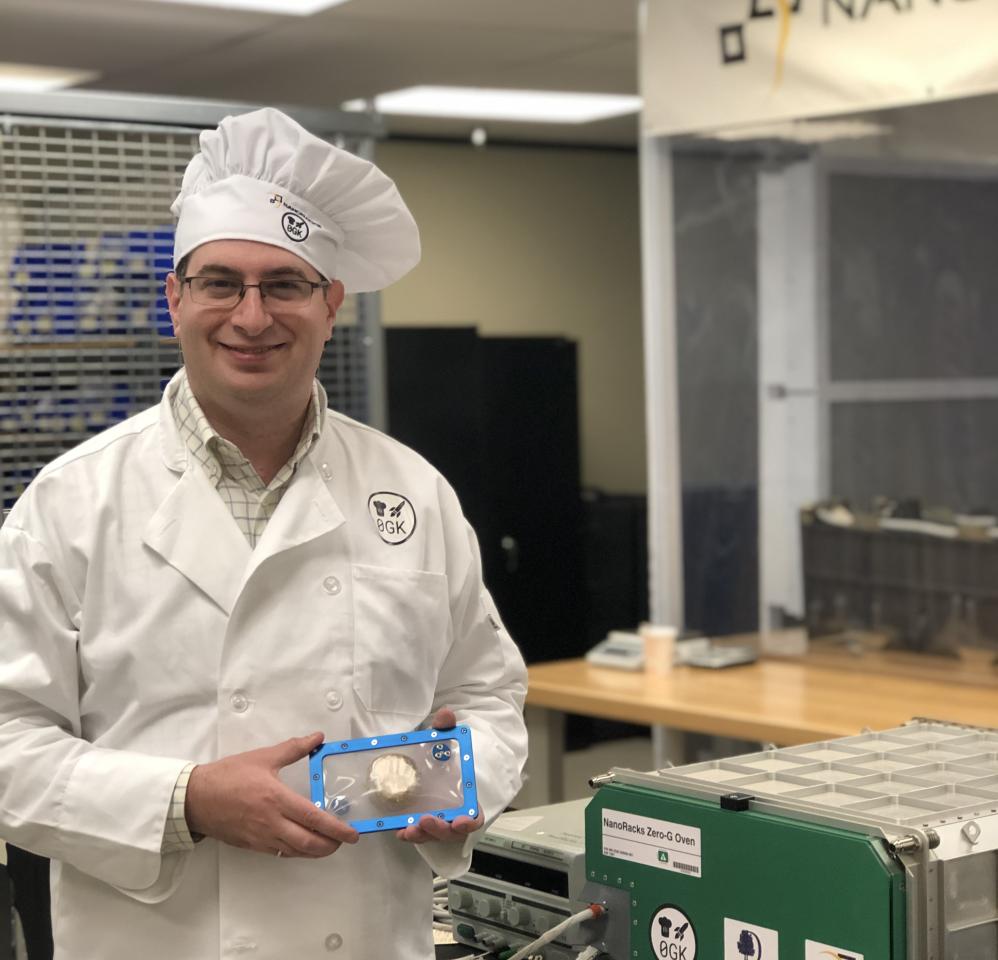 Experimental Baking on the ISS

Last November, five balls of raw chocolate-chip cookie dough made history. The cookie dough was delivered to astronauts in the International Space Station (ISS), where – after several hours of trial and error to gauge how outer space changes cooking times – it became the first food ever baked in a zero-gravity oven. The oven is a new innovation from Zero G Kitchen, founded by alum Ian Fichtenbaum and his wife Jordana.

The cookies may have made history, but no one yet knows how they taste. Since nothing has ever been baked in space before, this first batch had to be sent back to Earth for testing by food scientists. Inhaling the scent of baking cookies without being able to eat them is surely a torture only a psychopath could devise – so Zero G Kitchen launched a tin of pre-made cookies to the ISS as well, as a snack for the pioneering space bakers.

Fichtenbaum, who graduated in 2006 with a master’s degree in management from the UBC Sauder School of Business, hopes that freshly baked foods will someday be routine in space. Currently, the ISS is equipped with a food warmer and a re-hydrator to resuscitate pre-made or dried meals, respectively – not an especially appetizing prospect for a year-long tour in space. To improve the menu and promote astronauts’ well-being, Fichtenbaum aims to create a full zero-gravity kitchen, one piece at a time.

In addition to nourishing astronauts, Fichtenbaum hopes that Zero G Kitchen will give the public a relatable way to engage with space systems science. “We asked ourselves, ‘What’s the laboratory that most of us have in our home? It’s the kitchen.’” An oven in space, he and Jordana decided, would help the average person to connect with the science behind the ISS in a way that more esoteric equipment could not.

Besides, says Fichtenbaum, the project is undeniably fun. He and Jordana began the company when they were engaged, the way a less imaginative couple might have signed up for community centre salsa lessons: they were looking for a new, creative challenge to take on together. With Jordana’s background in hospitality industry communications and Ian’s in spacecraft systems, the project made full use of their complementary skill sets.

Making culinary history may have been fun, but it was no easy task. The engineers at Nanoracks, with whom Zero G Kitchen worked to design the oven, grappled with an array of technical challenges. Because the ISS has limited energy to spare, for example, the oven must run on only 90 watts, whereas an average oven uses around 2000 to 5000 watts. And the zero-gravity environment brings its own challenges. Hot air behaves differently in space, so the oven must rely on conductive heat transfer, rather than convection. There are also unique safety considerations: an escaped crumb from a baking cookie could float around the ISS and damage delicate equipment. To prevent this, the cookies are baked sealed in silicone pouches – with filtered air vents, otherwise “the thing blows up like a balloon.”

After months of testing, the result is a cylindrical, energy-efficient oven. The process of creating the zero-gravity oven, says Fichtenbaum, has proven to him that “if you are smart, and think creatively, and have a certain amount of persistence, things do happen.”

What’s on the horizon for Zero G Kitchen? “We’d like to have a blender up there,” Fichtenbaum says. In the meantime, “the oven is open for business” – and the milestone moment of eating the first cookie baked in space still awaits a hungry astronaut.