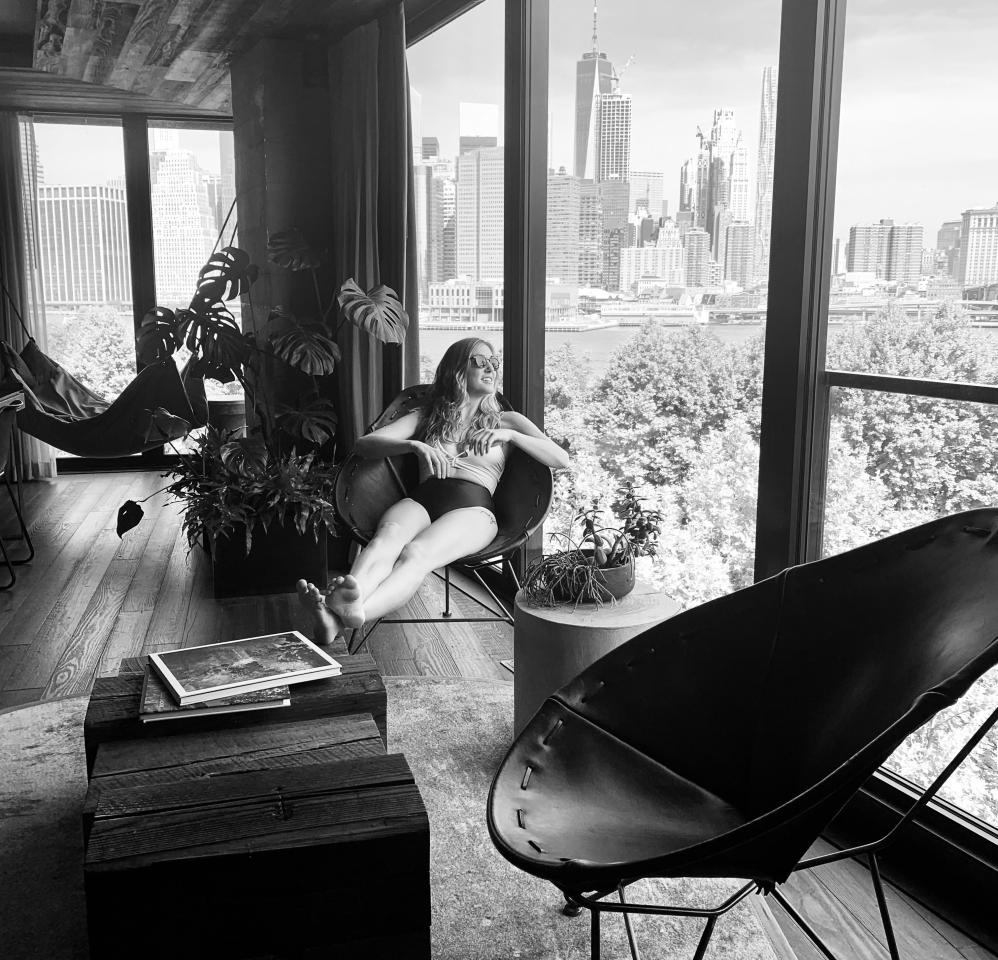 Mikaela Gauer at the 1 Hotel Brooklyn Bridge, with its sweeping views of the New York City skyline. Photos courtesy of Mikaela.

Mikaela Gauer (BA’08) is a creative director and photographer, who has been living in New York City for the past 14 years.

How did you come to live in New York City?

Two weeks after my UBC graduation, I travelled to NYC to visit some friends. I was swept up in the city's intoxicating energy and postponed my return flight by a month. The month came and went, and I ended up cancelling the flight. I got an internship at TRACE Magazine, which turned into a full-time job offer that set my career in motion.

New York is a microcosm of the world, a melting pot of every country, language, and creed. It’s the heartbeat of culture and a city full of possibilities. You can access any type of experience you want if you’re curious and open.

Each neighbourhood is unique and I encourage visitors to explore as many neighbourhoods as possible to get a sense of New York's diversity. I have spent most of my time living in Brooklyn — eight years in Fort Greene, and most recently in Greenpoint. I love Greenpoint — a predominantly Polish neighbourhood that lies just north of Williamsburg on the East River.

Best time of year to visit
May to June, September to October.

Best place to stay
1 Hotel Brooklyn Bridge or The Bowery.

Best cultural experience
Live music is the heartbeat of New York. From Broadway to jazz clubs to subway musicians — take it all in.

Latest trend
New Yorkers are nonconformists. Just be you.

If you could change one thing about New York, what would it be?

The amount of garbage on the streets. And with the trash come the rats. You know you’re a New Yorker if a rat has run over your feet more than once.

New Yorkers are some of the most welcoming, friendly, and kind people — it is a city made up of immigrants. Also, you can walk everywhere. It’s definitely the best way to explore and get a feel for the city. After a while, the city feels small and you realize how interconnected everything is.

New York has a ton of green space, despite its reputation. Some of my favourite parks to chill, read, or people-watch are McCarren Park, Fort Greene Park, Washington Square Park, Prospect Park, and of course, Central Park. It’s magnificent.

What are your favourite hidden gems or activities that only locals know about?

There are a handful of speakeasies and secret bars all over the city, but my favourite is Mezcaleria La Milagrosa — a hidden mezcal bar in Williamsburg. Another true gem is Toñitas — the oldest Puerto Rican social club in Brooklyn. Order a cerveza (en español, por favor) and join in the salsa dancing.

You can find incredible art collections within the city and outside of it. Dia Beacon, Storm King Art Center, and Philip Johnson’s Glass House are all worth a day trip.

What’s the most over-rated tourist hotspot?

There are several places you can visit to see them once — and then never return. Real New Yorkers avoid Times Square like the plague. The High Line and Chelsea Market are always packed with tourists. Brave it for the best tacos in the city (Los Tacos No. 1) and then head north to the galleries in Chelsea, or south to The Village.

How easy is it to meet new people?

Life in New York happens on the street. If you put yourself out there, you can meet any kind of person in New York.

What issues are particularly important to the people of New York City?

What is one local custom that every visitor should know about?

Talk to your cab driver. Cabbies are some of the most interesting people in New York and typically have a wealth of stories to share.

Looking to connect with your UBC alumni community?

If you’re a UBC alum living in New York City, check out our Facebook group to connect with other grads in your city.

Otherwise, if you live outside our campus communities in the Lower Mainland and Central Okanagan, visit the Global Alumni Network page to see if there’s an alumni ambassador or social media community where you live.

Finally, alumni volunteers also host fun My Town Meetups in locations around the world. Check out our Meetups page to see if there’s a gathering near you — or sign up to host one in your location!