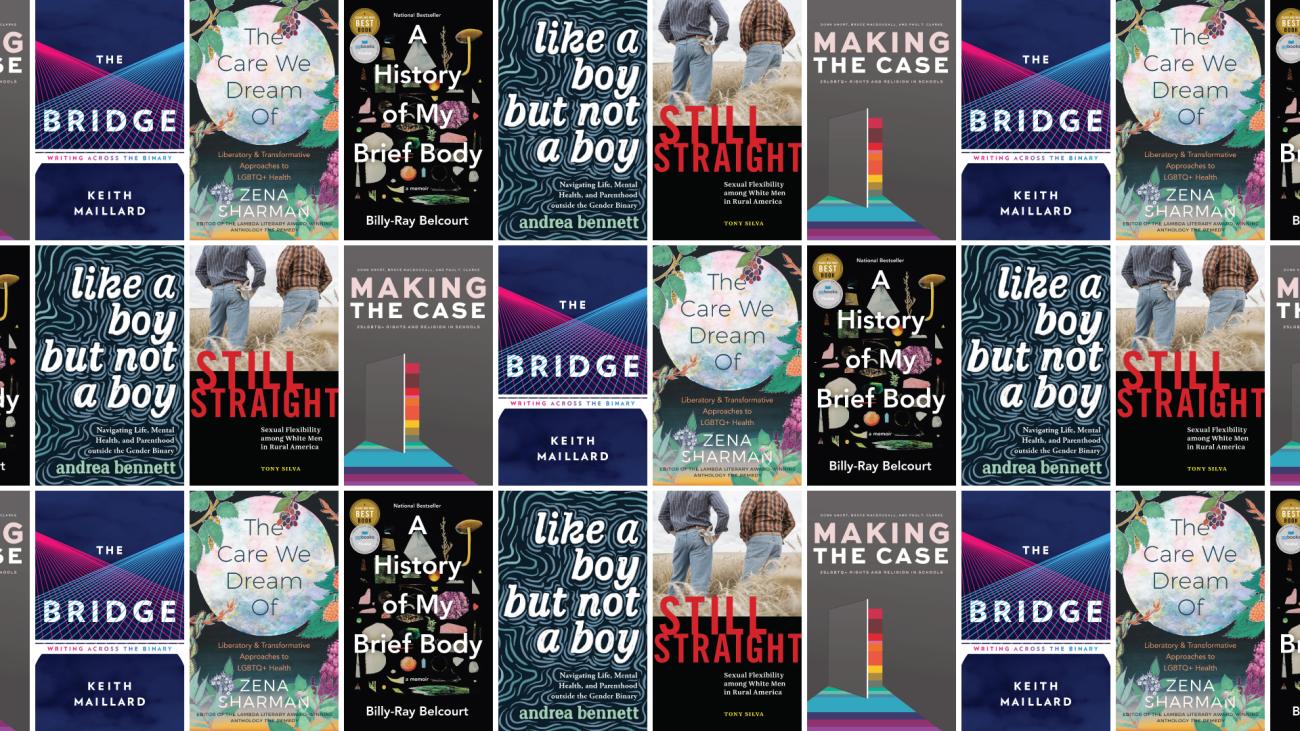 Pride on the page: 6 titles by UBC writers

Spanning literary non-fiction, memoir, essays, studies, and anthologies, this reading list will help to deepen and broaden your understanding of 2SLGBTQIA+ people and issues.

The rainbow colours, the out-there outfits, the pulsating dance beats — each year, Pride festivities transform locales into dazzling spaces. Yet beneath the exuberance and glittering appearances, gravitas informs these celebrations: there are the personal and public battles that 2SLGBTQIA+ people and allies have fought, won, and lost, and continue to struggle with.

To prepare for and deepen your appreciation of queer festivals held throughout the year (particulary during the summer), here are six recently published books, written by UBC faculty and alumni, to consider reading.

These titles include memoir, essays, academic studies, and anthologies, sometimes blending genres or even incorporating poetry and fiction. Most importantly, all of these entries convey a reassurance that’s ever-pertinent for queer people of all stripes: you are not alone.

A History of My Brief Body
By Billy-Ray Belcourt
Penguin Random House Canada, 2021

In his debut memoir, UBC creative writing professor, author, and poet Billy-Ray Belcourt (he/him) of the Driftpile Cree Nation meditates upon his Indigeneity and queerness with frankness and a density of insight. Belcourt crafts prismatic prose with incisive word choices and unexpected turns of phrases that crackle with nervy truths.

Set amid the socio-political landscape of racism and genocide “on the shores of what is now improperly called Canada,” Belcourt charts the trajectory that his life has taken. From his childhood with his twin brother in Joussard, Alberta, to his forays beyond, he reflects upon love and loss, sexual encounters, and health care entwined with legacies of historical trauma, marginalization, and oppression.

“In our insistence against elimination, the logical holes in the fabric of a colonial world are revealed,” Belcourt writes. “Wherever light rushes in is an exit route.”

The Bridge: Writing Across the Binary
By Keith Maillard
Freehand Books, 2021

Haunted as a child by the question “Am I a boy or a girl?”, UBC creative writing professor and novelist Keith Maillard (he/him) surveys his lifelong struggles to reconcile his identity in this thematically driven memoir. Beginning with his childhood in Wheeling, West Virginia, in the 1940s, Maillard revisits his gender-related experiences, tracing them into adulthood and his literary career.

In the development of this book, he states that he couldn’t separate gender issues from his growth and work as an author. “Writing fiction is not about words on paper; it’s about creating a space where people can live,” Maillard explains.

His is a quiet but deftly articulated tale. It provides thoughtful historical context for readers to consider what life was like for queer people before widespread awareness, rights, and the internet existed. Maillard’s personal story can deepen appreciation of the numerous social and cultural shifts that have since taken place — and serves as a reminder not to take them for granted.

A spectrum of health

Like a Boy But Not a Boy: Navigating Life, Mental Health, and Parenthood Outside the Gender Binary
By andrea bennett
Arsenal Pulp Press, 2020

Amid the diverse identities of the 16 individuals profiled by bennett — from 29-year-old bisexual Jane who grew up in Scarborough, Ontario, with immigrant parents from Hong Kong, to bigender and two-spirit rhean, born in 1980, who moved around B.C. — some commonalities emerge. There’s identity confusion and resolution, coming out, family and relationship complications, discrimination, and migrating from rural to urban settings. Despite the stark truths that the author confronts, the cumulative effect of interpolating all these experiences is a sense of community, connection, and, as bennett puts it, “a type of chorus.”

The Care We Dream Of: Liberatory and Transformative Approaches to LGBTQ+ Health
Edited by Zena Sharman
Arsenal Pulp Press, 2021

UBC alum, writer, and speaker Zena Sharman (PhD’10, she/her) explains that “many LGBTQ+ people associate accessing health care with feeling invisible or too visible or like nobody understands us, our bodies, our relationships, and who we call family.” Accordingly, Sharman's impetus for creating this collection of writing — spanning essays, interviews, storytelling, poetry, and even fiction — was asking: “What if queer and trans people loved going to the doctor?”

Ranging from an eight-year-old transgender student barred from the girls’ washroom at her Manitoba elementary school to a 17-year-old gay student seeking to take his boyfriend to his Catholic secondary school prom in Ontario, the authors cite various legal cases to illustrate how Canadian legislation addresses “competing rights.” Ultimately, the authors assert that sexual orientation and gender identity (SOGI) rights can co-exist alongside religious freedom.

The book spans contentious issues in education, how anti-bullying initiatives led to 2SLGBTQIA+–supportive policies, the importance of recognizing how Canada is changing, and the need for hearing from everyone involved in these matters — especially children, “who have often been silenced or subsumed by the voices of others.”

While many may assume that straight men having sex with other men are actually closeted bisexual or gay males, UBC sociology professor Tony Silva (he/him) makes the case that among them are those who are, in fact, straight. Focusing on the largely understudied sexuality of men in rural locations, Silva interviewed 60 men in the USA’s Pacific Northwest, Northern California, Mountain West, and Midwest between 2014 and 2017.

The results may be eye-opening for those not already in the know — and maybe even for those who are. Many of these men (usually in sexless marriages with women) regard sex with men as a means for physical pleasure without attachment or cheating.

It’s ambiguous territory that Silva acknowledges is “messy,” “complicated,” and “often filled with irony and paradox.” Yet Silva’s overview of how attitudes towards sexuality and gender change over time and across social contexts underscores how concepts like “heterosexuality” and “masculinity” mask realities that are far more fluid than rigid definitions allow for.